LTE vs 5G: What's the difference?

Assessing the latest networking technologies and their role in business 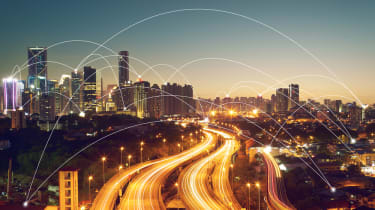 It has been a long time coming, having been teased and touted as a revolutionary telecoms technology for years, but 5G is finally here. The next-generation of mobile broadband and wireless cellular connectivity is rolling out in various parts of the world and notably in a handful of major UK cities.

But for some, LTE, which stands for Long-Term Evolution, might still seem like a relatively new connectivity technology, despite it being first commercially introduced in late 2009 and taking the best part of a decade to become more ubiquitous. There are still a few places that lack LTE, which begs the question: Is the hype behind 5G is really meaningful when LTE still has plenty of telecoms mileage left in it?

What is the difference between 4G LTE and 5G?

Let's start with LTE; in essence, it is a 4G technology, so is often referred to as 4G LTE. However, it did not meet cellular network regulator International Telegraph Union Radiocommunication's standard for what constitutes 'True 4G' speeds.

But the ITU-R realised that telecoms companies were struggling to meet the speeds the regulator expected for 4G, so the 4G LTE standard was created and acted as a means to showcase connectivity speeds that were noticeably higher than those of 3G.

A full explanation of LTE and its coverage can be found here.

As it stands, 4G LTE can hit theoretical speeds of up to 150Mbps download and 50Mbps upload. In reality, those speeds tend to translate to download speeds of 20Mbps and upload speeds of 10Mbps.

As the fifth-generation of mobile connectivity, hence its name, 5G offers theoretical top speeds that can hit up to 10Gbps. Even at more realistic speeds, 5G absolutely beats 4G LTE with our recent testing of Vodafone's 5G network delivering download speeds that average out between 100Mbps and 150Mbps.

5G achieves this by using a different spectrum to 4G, notably the mmWave high-frequency bands, which support more bandwidth than the lower-frequency bands LTE uses and thus more data can be transferred.

Frequency bands below 6GHz but above low-band frequencies can also be used by 5G, but these will not support the top speed that 5G promises. Yet these speeds will still trump LTE, and 'sub-6' can even enhance the coverage of 5G as mmWave frequencies can be hindered by walls and other obstacles.

In short, 5G uses a different suite of spectrum than 4G LTE, allowing it to deliver better connection speeds, more capacity for higher volumes of traffic, and latency as low as 1ms.

However, the 5G rollout is still in its early stages. Coverage remains rather limited and there is far more work that needs to be done before networks from the likes of EE, Three and Vodafone start delivering upon the upper echelons of what 5G has promised.

Should you choose LTE or 5G?

The answer to that question depends on where you live, your budget and your business and personal needs.

As multiple countries expand their 5G infrastructure, there are more 5G-friendly hardware options popping up on the market every year.

This month, Samsung is set to release the Samsung Galaxy S20 Ultra (which we have already reviewed here - you can thank us later), which is so 5G-compatible that it does not have a 4G variant. Retailing at £1,199, it is definitely on the priciest end, but you can also nab it with a £64 a month, 30GB data, “5G Essential Plan” via EE.

If you are looking for something that will not break the bank, you can definitely bank on Huawei. The Chinese tech giant is paving the way for affordable 5G gadgets, having recently introduced a 5G-compatible tablet into its “Mate” brand of products. The MatePad Pro 5G has a 10.8in display with a 90% screen-to-body ratio, as well as a punch-hole camera. The tablet comes in a set which includes a magnetic stylus and keypad. The best part? The price starts from €549 (£460).

With this in mind, adopting 5G over LTE at the moment might be a little premature. As 5G coverage expands and more network operators enter the fray, as well as more 5G-enabled devices entering the market, increased competition will doubtlessly drive down prices while also seeing more appealing services and packages on offer.

So unless you or your business has plenty of money to burn, it might be a shrewd bet to wait and see what 5G can offer in a tangible fashion over LTE.

However, the bandwidth and low-latency of 5G cannot be ignored if you are a business that relies heavily on connected sensors and similar internet of things networks. 5G has been long been touted as the communications technology that will enable driverless cars to navigate with ease and large networks of smart sensors and devices to be deployed by business in ever creative ways.

Mobile telephony has always generated health concerns, but arguably not many networks have got as bad a rep as 5G.

Last October, Brighton and Hove City Council joined Glastonbury, Frome and Totnes in banning the installation of new 5G masts. Opposition to 5G is not exclusive to the UK, but a part of a larger trend of mistrust (and misinformation). Two years earlier, 180 scientists from 36 countries publicly appealed to the EU to pause the expansion of 5G until some more comprehensive investigations into its effects on human health are carried out.

Both 4G and 5G use “radio waves”, yet the main difference is that 5G uses higher frequency waves than 4G. The higher frequency waves are the ones which provide a much better network capacity and speed. However, studies into the health risks related to 5G have not been able to find any specific, genuine danger of 5G.

The future of LTE and 5G

As mentioned, the future of 5G is all about its expanded rollout and the introduction of more 5G-enabled devices; Qualcomm noted at IFA 2019 in Berlin that it would be pushing down its 5G modem technology to its mid and lower-range chips, paving the way for device makers to integrate 5G connectivity into affordable hardware.

The potential for 5G to enhance existing technology and lead the way for more innovative connected systems, and potentially society-changing machines such as self-driving cars, is only set to grow.

Meanwhile, LTE will continue to exist and be supported, though as the years roll on it is likely telecoms companies will eventually switch off 4G LTE networks, in much the same way 2G is currently being phased out in the UK.

5G is the future of telecoms until 6G comes along. But for most, it's perhaps not quite the right time to jump on the 5G bandwagon.