Company announces a 5G network, digital skills training and a return to the high street 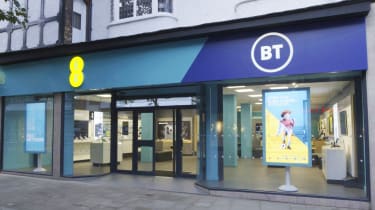 BT has today announced a raft of ambitious plans to improve its business customers' connectivity, including a new 5G service, improved support, digital skills training and even free speed upgrades.

Unveiled at an event at its London headquarters, the biggest news was the launch of BT's 5G network, which will be switched on across 20 UK cities this Friday. The service, which will utilise existing EE infrastructure, will be extended to 25 further cities before the end of the year.

The first cities to get BT's 5G include major urban centres, such as Bristol, London, Belfast Leicester, Edinburgh, Manchester and Coventry and customers can expect speeds 100Mbits/sec to 150Mbits/sec faster than existing 4G connections, according to BT.

No details on prices were announced or which 5G phones BT will be offering part of its packages. BT also announced that customers of the new service will also be able to opt for unlimited 5G data as part of the new "convergence" package called BT Halo.

Halo will combine 5G, landline and broadband in one plan and BT says it is the first company in the UK to offer such a service. BT Halo will offer customers not only unlimited 5G data, calls and texts, but also unlimited broadband and phone calls. This service is also coming to SMBs, in the form of Halo for Business.

This offers the same unlimited packages as the consumer version of Halo, as well as a digital phone line which allows businesses access to services not supported by traditional landlines, such as the ability to make and receive calls using their landline number on their smartphone. Halo for Business also includes uptime guarantees, 24/7 support and a fixed price for the duration of the contract.

SMB customers will also now have access to a new team of specialist "Tech Experts", which will assist with setup and deployment of critical products and services. Additionally, the company is investing in new business support teams to handle any issues that business customers may have.

BT also announced that larger customers with multiple branches will now be supported by SD-WAN services, rather than traditional physical links between locations. This, the company says, will offer increased flexibility and security.

Smaller businesses are not left out of the connectivity-boosting fun either; BT pledged that by summer next year, it will have upgraded 700,000 homes and businesses to superfast fibre broadband at no charge, phasing out the legacy copper infrastructure for 90% of the UK. The remaining 10% will be supported by 4G and 5G connections.

Another aspect of the company's plans is a raft of new digital skills initiatives, including programmes to provide digital training to groups including teachers, young people, the elderly and more. One such group is small business owners and employees, one million of whom will be provided with digital skills training through partnerships with organisations such as LinkedIn and Google's Digital Garage.

Finally, one of the most unexpected announcements was that BT will be returning to the high street. 600 EE stores will be converted to co-branded EE and BT outlets, providing a local point-of-contact for customers and small businesses.