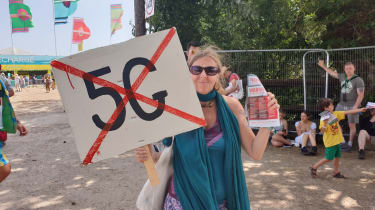 Brighton and Hove City Council is the latest local authority in the UK to ban the installation of new 5G masts because of a perceived risk to public and ecological health.

The council joins Glastonbury, Frome and Totnes as the authorities that have agreed so far to block the erection of the critical networking infrastructure until more conclusive evidence has been published about the safety of the next-gen network's emissions.

Three masts were due to be installed near Hove Park in Brighton, but the council have since said they would create "visual clutter" and damage the area's character, according to The Argus.

Campaigners from the Brighton and Hove Radiation Free group have been campaigning against the masts for several months, claiming the emissions could harm the health of local residents.

The leader of an anti-5G campaigning group in Totnes, John Kitson, told the Daily Mail: "Telecom companies, Public Health England, the World Health Organisation (WHO) - they all say no adverse effects on human health have been established during the use of existing 3G and 4G networks."

"But there have been thousands of peer-reviewed scientific papers which raise concerns," he added. "More than 250 scientists have urged the EU to halt the rollout of 5G because it means a huge increase in electromagnetic radio frequencies on top of the existing network."

The Brighton and Hove Radiation Free group said the 5G radio wave frequency is below visible light but higher than microwaves, a level it considers unsafe.

The evidence to support the 5G health scare is mixed and ultimately inconclusive, although many governing bodies seem to reject the notion to some degree.

One of the most-cited studies that supports the argument is the one carried out on rats - a two-year longitudinal study which involved exposing rats' heads to mobile phone radio waves for nine hours a day for a period of two years. Some male rats developed cancerous tumours on their hearts but the females did not.

"Safety is always going to be paramount when we roll out new technologies and innovations, however, there is currently no compelling evidence to back up concerns about 5G," said minister for digital and broadband Matt Warman to IT Pro.

"We want to support work that will bust health myths over 5G and provide evidence-based reassurance to the public. The benefits of 5G are huge - both to people's everyday lives and to the economy."

"There is currently a lot of misinformation being spread about 5G with some of the protestors clearly confused about the flavour of 5G being deployed in the UK," said Ben Wood, mobile and wireless industry analyst at CCS Insight to IT Pro.

"It is worth noting that the Wi-Fi routers many people have in their homes are using 2.4Ghz or 5Ghz and there are endless studies to show using this spectrum for mobile phone networks or Wi-Fi is safe.

"The sad thing is that the protesters in the South West are in danger of dramatically slowing down the rollout of mobile phone coverage an area of the UK that is currently underserved by both mobile coverage but also fixed broadband services.

"This risks leaving the area at an economic disadvantage versus other parts of the UK... it could also mean the difference being able to make a call in an emergency and not having any signal at all."

One campaigner from the Brighton and Hove Radiation Free group also highlighted their concern for local ecology, saying experts told the group that 5G would only have a 2mm penetration capability but added that could still be dangerous for animals such as ants.

Speaking to IT Pro, a spokesperson from the WHO said as radio frequencies increase, like the UK's 5G emissions as the technology becomes more advanced, bodily absorption of such emissions decreases.

"As the frequency increases, there is less penetration into body tissues and absorption of the radio energy, and any consequent heating, becomes more confined to the surface of the body," said the WHO spokesperson.

"Should the overall exposure remain low relative to international exposure guidelines, there should be no consequences for public health."