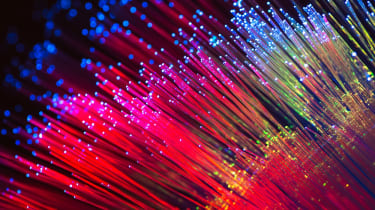 The government's overly ambitious pledge to deliver full-fibre broadband to the UK by 2025 has been highlighted in the Queen's Speech yesterday, in which an alternative bill has been proposed to instead deliver gigabit-capable speeds to UK homes.

His government will no longer pursue this pledge, which received widespread criticism from the broadband infrastructure industry, and will commit to a weaker version which, as of yet, has no specified end date.

The replacement Telecommunications Infrastructure Bill isn't expected to be passed in the current parliament due to the Prime Minister's lack of a majority. What's more likely to happen is that the bill will form part of the next Conservative Party manifesto to accompany the next general election.

A document published by the government yesterday detailed the proposed bill in greater depth, promising nationwide gigabit capable speeds "as soon as possible", easier broadband installation for flats and fast speeds to all new homes.

Over a "gigabit capable" network, the government said it will be 30 times faster than superfast broadband - enough to download a high-definition feature film in under 45 seconds.

Criticisms of the pledge

Since the Prime Minister made the pledge which he promised "would unite the country and our society", many industry leaders have spoken out claiming radical changes would be needed in order for the goal to be met.

Shortly after the pledge was made, an open letter titled '100% full fibre coverage requires a 100% full commitment from government' was sent to the Prime Minister from British broadband chief executives.

It asked for four issues to be tackled in order to deliver on the promise; one of which was a reform of planning laws, known as a wayleave agreement, so telcos can access land to install equipment, even if unresponsive landlords attempt to delay any sort of rollout.

The chiefs also asked for new homes to be built with fast speeds as standard and a rethink of the business tax applied to fibre cables which would encourage investment and "more ambitious rollout plans".

"The initial target was clearly ambitious," said independent telecoms analyst Paolo Pescatore to IT Pro. "Ultimately achieving full fibre as soon as possible has to be the end goal but there are too many hurdles. This is due to legislation, gaining permits and digging up roads causing too much disruption."

"Details in the speech align with our ambitions to build faster, more reliable broadband to as many homes and businesses as possible, and to help make sure no one is left behind," said an Openreach spokesperson to IT Pro.

"There's still more government can do - for example, reforming business rates which penalise fibre infrastructure - but this is a positive step in the right direction."

What's the difference between full fibre and "gigabit capable"?

There are three different ways to deliver internet to a building, such as a house or an office. There's asymmetric digital subscriber line (ADSL) which is a full-copper configuration from the exchange to the property. It's slower than more modern fibre optic cables but the nation's infrastructure was previously more reliant on copper, meaning there's more of it going to properties.

Fibre-to-the-cabinet (FTTC) involves laying fast fibre optic cable from the exchange to the street cabinet and then finishing the last leg of the delivery using copper.

Fibre-to-the-premises (FTTP), otherwise known as full fibre, will remove the need for a cabinet and simply deliver internet directly from the exchange to the property. This, however, involves a lot of labour to dig new lines to people's homes and extensive resources - hence the original far-away 2033 ambition.

O2's CEO Mark Evans has previously described the idea of digging up land to lay FTTP as "nonsensical" when technologies such as 5G could do the same job for less expense.