I thought I didn’t like robots, bot what would I know? 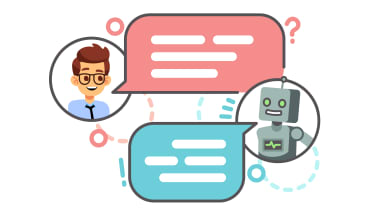 A strange thing happened to me on the way to the supermarket this week. While driving along (or, rather, being driven) I received a call on my mobile from an 0330 number - the giveaway of a business trying to contact me.

Upon answering, I was informed by the woman on the other end that she was calling from an unnamed large electronics and white goods retailer and that she just wanted to check that the day I’d arranged to have my washing machine replaced was still convenient. When I said that it was, she very helpfully told me the four-hour window when I could expect the delivery people to arrive. A brief, polite and professional courtesy call, which went a long way in the saga of my washing machine woes (see Twitter for ranty details).

But there was something off about the conversation. The way she spoke and the pauses between when I stopped speaking and her responses were slightly too long and slightly too quiet for her to be a normal call centre worker. In fact, it was more reminiscent of the myriad “Hi, it’s Laura calling from your insurer. I’m calling about the accident you had in the last three months, is that correct?” intrusions I receive.

This is why I believe my interlocutor on Monday was, in fact, a bot. And a good one at that.

I don’t know whether it’s being a tech journalist that’s made me this way or whether I’m just getting old and crotchety, but I’m not a fan of the proliferation of chatbots and AI for customer service. I believe in the importance of human interaction and I don’t think I’m the only one - people on the whole like to interact with other people. The idea that I’ll have to descend through several layers of chirpy but slightly clinical robots to get to a real person (if, indeed, it’s possible to reach one at all) fills me with dread.

It’s not just the inhumanity of transactions either - bots can be uniquely unhelpful because they’re trying to anticipate what you want from a limited range of predefined categories. If your request falls outside that, then you - and it - will have a problem. Furthermore, if you’ve ever been on the phone to someone in a call centre who, while in possession of a human brain chooses not to use it and dead ends you with a “computer says no” script, then conversing with a robot will be even more frustrating, as you can’t even attempt to reason with it or get it to think abstractly or laterally.

Those are my prejudices, but on the phone this week on my probably-a-bot customer service rep, the question of whether she was flesh and blood or ones and zeros didn’t really occur to me until I hung up. My initial feeling was simply one of relief and, honestly, happiness that I had an interaction that was a bit more personal than the bland SMS messages I’d been getting up until then from the manufacturer.

I don’t think I’m quite a changed woman when it comes to my bot scepticism. But perhaps our artificially intelligent peers won’t be quite the cold, unapproachable, and mildly infuriating hurdle I’ve thus far expected them to be.