The UK is ranked 47th in the world globally, behind most European countries 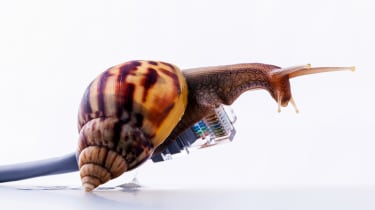 The UK has fallen 13 places on a league table of global broadband speeds, making it one of the slowest countries in Europe with an average of 37.82 Mbits/sec.

The UK is now ranked 22nd out of 29 states in Western Europe, an area that typically dominates the global speed table, according to a new report by Cable.co.uk.

Eight of the top ten fastest countries in the world for broadband are located in Europe, with the principality of Liechtenstein offering the fastest broadband in the world, at an average speed of 229.98 Mbits/sec. Jersey, Andorra, and Gibraltar rank 2nd, 3rd, and 4th respectively.

Despite Western Europe’s overall success, the UK has fallen to 47th place on the global rankings, compared to 34th place in 2019. In fact, the UK's speeds are now less than half of the Western European average of 81.19 Mbits/sec.

According to Dan Howdle, Cable's consumer telecoms analyst, the UK has suffered from repeated delays in the rollout of pure fibre networks.

“Countries and territories with a heavier reliance on or ongoing investment in pure fibre (FTTP) networks, or are upgrading to fibre or LTE from even more aged technologies, continue to see their averages rise," said Howdle. "Those that are somewhat late to that particular party, however, the UK being a case in point when it comes to pure fibre networks, have slipped back as others have risen faster."

"While around 60% of the UK has access to the Virgin Media network and can get speeds of up to 516Mbps, and there is limited availability of smaller networks such as Hyperoptic offering gigabit speeds, the Openreach network remains the anchor that keeps average speeds in the UK comparatively low. Entry-level fibre packages and 'fast' fibre packages on Openreach have been set at around 30-35 Mbits/sec and 60-70 Mbits/sec respectively for more than five years now with no significant changes beyond how those speeds are advertised.”

In May, Ofcom released a report which found that the average broadband speed in the UK had risen by around 16% in two years, making the average home speed 64 Mbits/sec, up from the 54.2 Mbits/sec recorded in 2018. However, the new findings by Cable.co.uk, which used data from M-Labs, shows that the UK might be missing out.