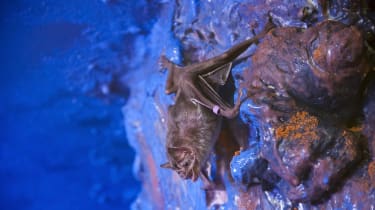 Smartphones may track our every move, but good luck getting wildlife to carry an iPhone (bat mobile, anyone? No?). Tracking animals is a key part of understanding their behaviour and protecting their habitats, and technology should be able to help – but it’s not easy to build systems that don’t interfere with animals, are affordable on limited academic budgets and actually work.

That’s why Simon Ripperger has spent the past seven years gluing tiny backpack computers to bats as part of a project known as Broadly Applicable Tracking System (BATS). An academic at Ohio State University, Ripperger studies animal social networks – how they interact with each other, not what they put on their Facebook profiles – and seven years ago was tapped by a team of researchers and engineers in Germany developing the next generation of tracking devices.

Currently, to track bats, they must be trapped, tagged with a radio transmitter and let free again. That transmitter requires a researcher to be within close range of the bat, meaning academics spend their time running after bats with an antenna. “You have a little transmitter, you glue it to the bat, and then the transmitter sends a beep every two seconds,” Ripperger said. “You’re literally holding an antenna and running behind the bat.”

Not only is that hard work, the data collected is limited – when working on his PhD about the impact on bats of modifications to the environment such as agriculture, Ripperger could only see where bats were every two minutes over a 30m2 area. “You’re tracking a couple of animals a month,” he explained . “You get really low data resolution, only a few data points per bat.”

The new solution still requires bats to be trapped, but expands the amount of data collected and means researchers don’t have to run around in forests. After trialling different ideas, the team of software developers and electrical engineers eventually built a 3D-printed “backpack” that houses a battery, sensors and transmitter, as well as a chip that runs bespoke software.

The sensors include motion detectors such as accelerometers and magnetometers, as well as a heart rate monitor and pressure sensors. All this helps measure the impact of high-flying on bat physiology. The system also uses a Bluetooth-style network to track which bats come into contact with each other.

That’s known as “proximity sensing” – it’s not wholly dissimilar to the contract-tracing apps being developed for the pandemic. Here, researchers tag dozens of bats, and BATS records when they interact. “The sensors log all the associations between the bats, so you create social networks,” said Ripperger.

The whole system is tiny, as the vampire bats being studied are only 8cm to 9cm in length and weigh around 40g. A heavy tracking system would change how they behave and fly, so the backpack needed to be lightweight to avoid such interference and lead to incorrect data.

As with any wearable, battery life was a challenge. The BATS devices are powered by tiny batteries, which have the power equivalent to 5% of an AAA battery. That means the backpacks can’t simply be left on all the time. Instead, the team paired an accelerometer with bespoke software, waking up the system when the bat takes flight or comes into contact with another bat, and then broadcasts every two seconds.

That helps improve battery life, but having software controlling the system also makes it more adaptive. Rather than simply collecting a data point at a preset time interval, the system collects more when the bat moves and pauses while it sleeps, for example, or increases the sampling rate at specific key locations. “You could also use a base station to upload a new software version,” said Ripperger. “If we see that the system isn’t working well for us, we can change some settings.”

BATS still requires bats to be trapped and trekking through the jungle to set up base stations, but researchers no longer need to follow a specific animal. Instead, the team installs base stations throughout a defined area. “Whenever the tagged animals fly into that area, the sampling rate increases and they send a lot of information, so we can reconstruct their flight trajectories at high resolution,” he said, something not possible before with only one point of location data every two minutes. After a two-week trial on 50 bats, the team had data on 400,000 interactions, all of which was downloaded directly to their phones.

That’s a crucial point: the base stations allow the data to be downloaded, rather than requiring the bats to be recaptured. The sensor system is glued to the back of bats, who will scratch it off within two weeks. Researchers then search for the backpacks in bat roosts in the hopes of reusing them. So this still isn’t a desk job: it’s for those willing to trek through forests and poke around in odd places.

The tracking system is broadly applicable to other animals, and is already being used on sand lizards in Germany to see how a local railway track maintenance impacts their movement. “This is a really great step forward in terms of automatic animal observation,” Ripperger said.