Network monitoring is an essential IT function in all businesses and there is a wide choice of SNMP based products capable of providing all the information they need. However, those that want to monitor network flow data for greater visibility into application usage may find they need separate products to achieve this.

SolarWinds Bandwidth Analyzer Pack (BAP) solves this problem by amalgamating its flagship Network Performance Monitor (NPM) with its NetFlow Traffic Analyzer (NTA). Strictly speaking, they are two separate products but NTA snaps in tightly with NPM so they can both be managed from the same Orion web console.

NPM provides the full gamut of tools for monitoring and analysing network performance, alerting, reporting and problem diagnosis. It supports a huge range of devices as along with SNMP and WMI, it can monitor VMware and Hyper-V hosts, FC switches, VSANs (virtual storage area networks) and wireless infrastructures.

NTA handles all flow data including Cisco NetFlow, Juniper J-Flow, IPFIX, sFlow and Huawei NetStream. It analyses the data and can present a great deal of information about application activity, who is using them and much more. 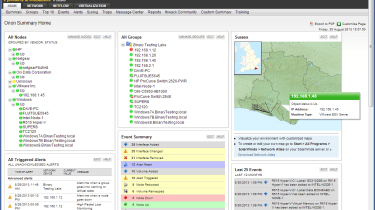 NPM must be loaded on a host system first and SolarWinds scores over Ipswitch's WhatsUpGold v16.1 as it supports Windows Server 2012. We loaded NPM on a Windows Server 2008 R2 host and found the process to be smooth with prerequisites loaded for us.

Before installing NTA, it's worth running the Sonar Discovery first as flow-enabled devices and interfaces need to have been previously discovered and added to the NPM database. We left Sonar to nose through the lab network and after a few minutes it had found all our systems.

These included Windows Vista, 7 and 8 workstations, 2008 R2 and 2012 servers, VMware hosts, switches, printers, NAS appliances and routers. Sonar can be scheduled to run regularly and it will issue alerts when new devices are found or changes are detected.

NTA only took a few minutes to install and provided a wizard to help configure its various services. NTA functions as an extension of NPM and on completion we found a new tab for it in the Orion web interface. 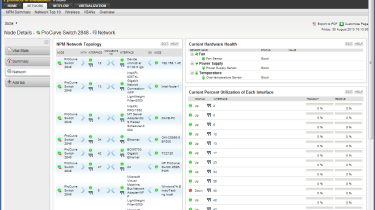 NPM's LUCID (logical, useable, customizable, interactive and drill-down) user interface lives up to its name. It opens with a complete summary of all network activity, device status and alerts so you can quickly identify problems.

The interface is fully customisable so you can easily build your own network views. The home page posts alerts when NPM detects problems and for diagnosis you select the device and drill down for more detail.

The level of information provided for each device is impressive. The network topology views were particularly useful as we could view our HP ProCurve switches and see which systems were physically connected to each port. 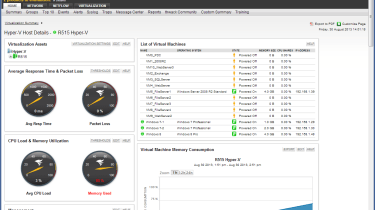 IVIM has its own tab in the Orion console and under this are summaries of virtual hosts and extra tabs for VMware and Hyper-V. Sonar found our VMware hosts without any problems but for Hyper-V systems you must run a manual discovery using WMI instead of SNMP otherwise it won't spot them.

Wireless device support is also superior to WhatsUpGold as NPM includes it as standard and it supports a lot more vendors. We tested with Netgear SNMP-enabled APs and were able to view all wireless interfaces, list their SSIDs, see connected clients and check on performance. 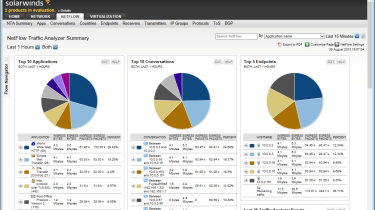 As we had our NetFlow sources already configured with the NTA host server as a target there was nothing for us to do. Their traffic was picked up automatically and the relevant interfaces added to the NTA console.

The NTA summary screen provides a complete rundown on flow traffic with graphs showing detected applications plus the top conversations and busiest endpoints. Plenty more tabs are provided so you can quickly move to viewing application activity and bandwidth usage, NetFlow sources, receivers and transmitters.

The application graph provides a wealth of information as we could quickly see the amount of bandwidth being sucked up by email, web browsing, VoIP, FTP and media streaming. Pick an application and you can drill down and see bandwidth usage in even more detail. Alerting and reporting

NTA hitches a ride on NPM's alerting module so it can issue flow related alerts. These range from endpoints using excessive bandwidth to issues with Cisco's CBQoS traffic management policies. Alerts are configured from the Orion Alert Manager and range from sending emails to running scripts.

NTA adds an extra group of predefined NetFlow and CBQoS reports to NPM which can be configured using its Report Writer. There are plenty to choose from which can all be customised with date ranges and filters and sent out regularly via email. Conclusion

The Bandwidth Analyzer Pack is comparatively good value although it's a shame SolarWinds doesn't offer a price incentive when purchasing both NPM and NTA (BOGOF may be asking too much). Even so, businesses that need high levels of information about their networks and the applications running on them should consider this fine partnership.

SolarWinds BAP looks to have every angle covered for network and application monitoring. The NPM and NTA components snap seamlessly together and are capable of providing a huge amount of valuable information.