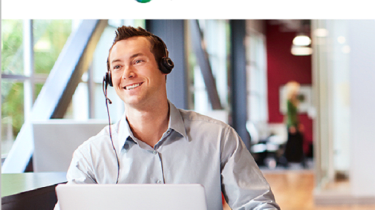 BT launched its MeetMe audio conferencing service today, which it claimed will re-invent the way businesses make conference calls. But is it really as crystal clear as claimed?

We had a chance to go ears-on with the service testing call quality on Mac, PC, iPod and the unreleased Dolby Conference phone. These tests were carried out in a controlled environment at the BT Tower using Wi-Fi only, so we will update this review once we've carried out independant testing, but the signs are positive.

Dolby technology is present in two forms within MeetMe, explained Andrew Borden, VP of comms at the firm. The sound specialist has media servers inside BT's datacentre that mix voices from conference calls. On the end user side, software for PC, Mac and smartphone/tablet devices provides the noise cancelling and voice separation features.

Call quality across all devices was a significant step up from a traditional dial-in conference call system. We started off inside a 20-seater boardroom and tested a prototype Dolby conference phone.

All the remote participates had their voices cleaned up via the custom-made system and clarity was notable when this audio cleansing feature was switched off. There was no need to ask anyone to repeat themselves and even when the Dolby chairperson stood in the corner with his face to the wall he was still audible to those not present in the room. This was something IT Pro verified when we participated in the same test as a remote user.

The most personal experiences were over the Mac and PC using a Jabra headset. The only problem we experience was the volume - some users have their microphones too close to their mouth making them too loud - and this was easily remedied.

When using the Mac and PC, it felt like we were sitting in a room with other participates as the Dolby Voice Separation software provided that surround sound feel.

Switching to an iPod, and using a pair of Apple's standard earpod headphones, we found quality wasn't quite as crisp as PC/Mac but it was still clearer than a regular deskphone and mobile conversation. Different voices were again funnelled to each ear creating the surround sound experience.

It's easy to join a conference call as it only requires one-touch to set up a connection on all platforms. All software interfaces are simple you can see all other participants, mute your line or leave the meeting. The chairperson has additional powers including the ability to record the conversation as well as add or eject participants. 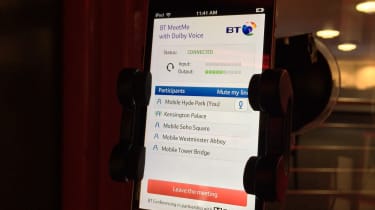 MeetMe with Dolby Voice is available to use on PCs and Macs from today. Android and iOS apps will be made available in Q1 2014 and the Dolby Conference phone will be launched in the second half of next year and will cost the same as premium Polycom devices which retail between $900 and $1200.

BT has yet to disclose exact pricing and - as with all enterprise grade equipment it will depend varying on the number of employees and usage patterns. MeetMe will be charged on a per-pence-per-minute basis and BT Conferencing CEO, Howard Dickel confirmed to IT Pro this will be a "premium" service. But, from what we've heard so far, it's going to worth every penny and likely to increase the productivity of conference calls no end.

We'll post a full review of MeetMe with Dolby Voice later this month.