Ruckus Unleashed is a range of SMB-oriented wireless access points with an integrated WLAN management interface. They're designed to provide reliable and easy-to-manage Wi-Fi in office, cafe and retail environments.

Ruckus Unleashed networks are designed to scale to handle up to 25 access points and 512 simultaneous client connections. Rather than having a dedicated controller to manage your wireless network, as you'll find in enterprise-grade AP networks, the first Ruckus access point connected to your wired Ethernet network instead acts as a controller for any others you may connect. Any access point can be configured as either a passive member of the group, its primary master or as a standby master in case the primary master loses connectivity.

The Unleashed system is intended to be a median between the inconvenience of stringing together multiple consumer-grade access points and the high cost and complexity of enterprise access point controller systems. It also has a wider range of guest network options than you'll find on most wireless routers aimed at business users, such as customisable hotspots and printed, SMS or email delivery of guest account details.

The Ruckus ZoneFlex R500 and R600 Unleashed units are both dual-band 802.11ac wireless access points. They can take Power over Ethernet (PoE) or be powered via a 12v adaptor, sold separately, depending on what best suits your network. Both access points are built for indoor use and come with sturdy mounting kits allowing them to be attached to a wall, pole or ceiling. The APs have internal antennas with no option of connecting alternative external antenna modules, so you can't use third-party hardware to increase their broadcast range or add weatherproof components to create an outdoor wireless network. This doesn't come as much of a surprise, given that Ruckus's proprietary fine-tuned antenna technology is a key part of the Unleashed system. 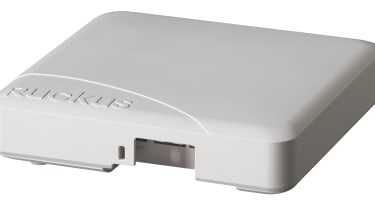 Although the two units look identical, there's a key difference between them: while the R500 has two antennas, supporting two-stream MIMO and a theoretical maximum throughput for 300Mbps at 2.4GHz and 867Mbps at 5GHz, the R600 has three antennas and three-stream MIMO for up to 450Mbps on the 2.4GHz band and 1,300Mbps using its 5GHz radio.

Both access points apparently use a range of patented technologies involving adaptive antenna patterns and signal optimisation. Ruckus by default uses a single SSID to allow a client to connect, and assigns client traffic across different channels, using both the 2.4Ghz and 5GHz radio bands to minimise interference and conflicts.

Once you've connected the access point to your Ethernet router and, if necessary, to a power supply, it'll automatically power on and create an unencrypted wireless network for you to connect to and complete the configuration process. A wizard takes you through creating a new Unleashed Network and setting up an administrator account for it.

After your master access point is set up, all other Ruckus Unleashed access points connected via Ethernet to the same network and assigned to the same subnet will be automatically detected and integrated into the Unleashed control interface. From there, you can designate another access point as a Secondary Master in case the first fails.

The main Dashboard, which allows you to monitor the traffic and performance of all your APs, is also home to some key settings for those access points. Although the system is incredibly easy to set up, its undeniably attractive interface is in places obtuse and difficult to use. This is partly because Ruckus has done away with many of the conventions of business networking hardware interfaces. 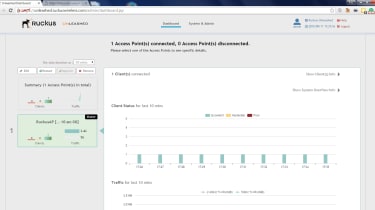 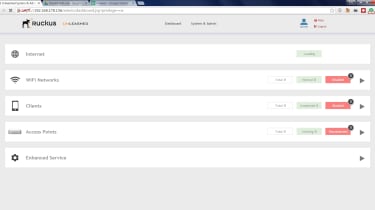 If you want to configure an individual access point in greater detail, such as to use only the 2.4Ghz or 5GHz radio bands, you have to expand the client tab, select the access point in question by clicking on what at first appears to be a graph positioned to the left of the main traffic graph for your network, and then hit the edit button above that. The same applies to configuring each of the individual wireless networks you can create. 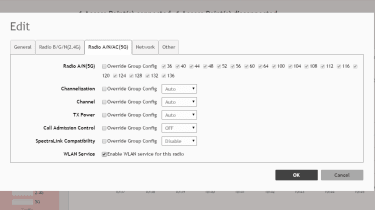 The dashboard interface is to some extent redeemed by its internal consistency, but we found ourselves missing the boring, but reassuringly conventional, tabs and grid lists that are common to most networking hardware. We'd have also liked slightly more detailed and better-illustrated documentation for the dashboard. Somewhat confusingly, there's a separate settings screen for configuring a few other features, including guest networks, users, and roles, which uses a far more conventional interface. 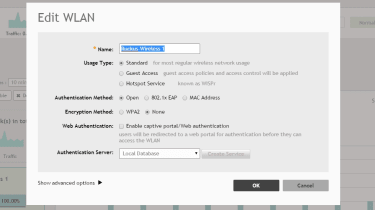 It's easy to create and configure multiple wireless networks

Ruckus has an integrated Guest Info interface that lets your staff generate guest accounts for customers, valid for a period of days, weeks or hours. The information can be sent via SMS or email, or printed and given to your guest. You can also create a simple isolated guest network, ideal for office environments that wish to provide visitors with access to the internet or critical networked hardware. Alternatively, you can set up a full wireless hotspot and allow guests to register themselves on the network, although, as is usually the case with such options, you'll need a separate webserver and RADIUS server to set up a captive portal that guests will see during the registration process. 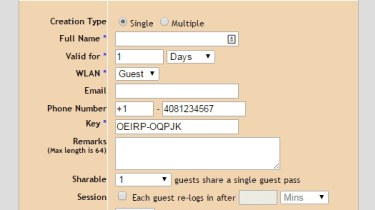 We were disappointed to find that Ruckus Unleashed doesn't currently support SNMP monitoring, which would allow you to use Nagios or other monitoring tools to immediately alert staff if an access point failed. Although the status of your access points is displayed when you log into the management interface, it doesn't have any alert options to email you as soon as something goes wrong. While Ruckus says that SNMP support is on the roadmap for future firmware releases, its absence is currently a major hole in the system's suitability for the medium-sized enterprise environments that it's otherwise well suited to.

We tested both the R600 and R500 using their default configuration, which uses both the 2.4GHz and 5GHz radio bands but manages traffic and assigns bands and radios to clients automatically. Both models proved to have good performance at long range when tested with our Trendnet AC600 wireless adaptor.

The two-stream R500 performed well, with our 802.11ac dongle, with throughput at 25m coming in at 76.7Mbit/s for 5GHz, and 49.3Mbit/s at default mode, despite a markedly poor performance of just 13.9Mbit/s in 2.4GHz mode alone, proving the value of Ruckus's channel optimisation system in at least some circumstances for clients capable of only connecting on the 2.4GHz band. We saw comparable, but far less dramatic results at 10m, with the 5GHz radio achieving a quick 109.8Mbit/s, with the 2.4GHz radio managing 48.4Mbit/s and the self-selecting default mode clocking in at 53.6Mbit/s. 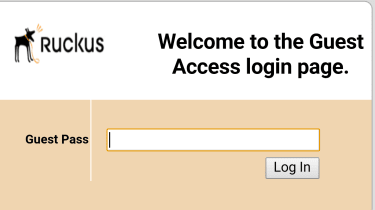 The appeal of the Ruckus Unleashed system hinges on its specialist features. The most important of these is the ability to control all of your access points from a single interface, a feature that you'd normally only get by using a dedicated WLAN controller infrastructure. The ease of basic configuration and of adding new access points to your Ruckus Unleashed network is fantastic if you have to deploy and manage large numbers of APs.

However, although it's less expensive than, for example, Cisco's or even Ruckus's own dedicated wireless controller and access point hardware, the Ruckus Unleashed system doesn't come cheap. The units we looked at, the R500 and R600, cost 450 and 550 (both ex VAT) respectively. The cost of a couple of Ruckus Unleashed APs would buy you a dedicated controller and four access points from more budget-conscious rivals such as Zyxel.

Additional considerations include the system's unconventional and at times obtuse dashboard interface and its lack of alerts or support for external network monitoring systems to alert you as soon as an AP fails. We're definitely keen on the idea of a self-contained wireless access point system, but Ruckus Unleashed's relatively high price, lack of monitoring support and quirky interface currently limit its usefulness.