BT has apologised after "several hundred thousand customers" in the UK lost their broadband connection.

BT said its systems were "fully restored" from 19:00 GMT, but said some customers may need to reboot their equipment.

A BT spokesman told IT Pro: "A faulty router was to blame for the outage and we apologise to those customers who were affected."

The outage began around 14:30 GMT. Landline services were not affected, BT said.

Thousands of BT customers were left without broadband today after an outage struck the telecoms firm.

Down detector, a website that monitors internet outages, registered more than 18,000 reports of problems across London, Birmingham, Guildford, Manchester and Leeds, starting at 2pm.

One user, Paul Butler, said: "My BT internet is down, in SE8, and the BT Broadband number has an engaged tone, & BT Faultline just cut out! What's going on?" 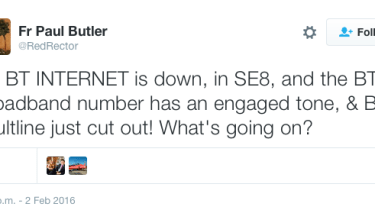 A spokeswoman for the company said there was no evidence to point to a cyber attack, but did not reveal the cause of the problems.

She said: "Large numbers of customers have been experiencing temporary issues with their broadband services this afternoon. Customers can still receive and make calls as normal.

"We've been working hard to fix the issue and are glad to report that nearly every customer affected is now reconnected, approximately two hours after the problem started.We apologise to any affected customers for the inconvenience."

The outage comes the day after BT announced a company-wide restructurefollowing its acquisition of EE, and analyst firm CCS Insight said the incident will be a blow to BT's mobile ambitions.

Paolo Pescatore, director of multiplay and media atCCS Insight, told IT Pro: "Unfortunately it just shows the no provider is immune to any outages. It just goes to show the importance people place on being connected at all times, and the importance for providers to ensure customer service.

"You can see BT struggling to attract subscribers and even some customers thinking about leaving as a result of this, as we've seen with TalkTalk's results, which [the 2015 network hack] had a huge impact on its subscriber base."

But he warned that the biggest consequence could be for Openreach, BT's arm responsible for rolling out fibre networks across the UK, and which regulator Ofcom is considering removing from BT's control, partly due to accusations of underperformance.

"The challenge for Openreach lies in the service quality, and in light of today's outage, that's something that Ofcom will very much be looking into and ensuring that the standards for Openreach around quality of service, speed and investment are increased," Pescatore said.