Ocado works out how to control 1,000 robots at once 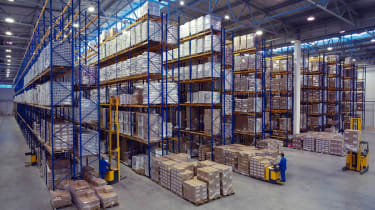 Online grocer Ocado has installed what it claims is the world's most advanced wireless control system in partnership with Cambridge Consultants.

With the technology, Ocado can control 1,000 robots, communicating with them 10 times a second to co-ordinate the movement of hundreds of thousands of crates.

The grocer compared the feat with controlling the movements of aircraft flying in and out of Heathrow Airport everyday, but if they circled around within a few kilometres of each other.

After finding existing mobile technologies did not provide the control or scalabiity Ocado required, Cambridge Consultants found a 4G telecoms system deployed in an unlicensed 5GHz Wi-Fi that would prove suitable.

Ocado Technology's director of technology, Paul Clarke, told IT Pro: "Existing communications technologies such as WiFi could neither handle the density of devices (WiFi might typically handle 100-200 clients per access point) nor provide the guaranteed low latency and variable bandwidth that our application requires."

Tim Ensor, head of connected devices at Cambridge Consultants, added: "We created a system based on the principles of 4G but which can support 1,000 devices from a single base station over 10 times more than is usually possible. At the same time, we needed to ensure it met the requirements of operating in licence-free spectrum. It is the first time this has all been done with 4G technology."

Ocado, as the intellectual property owner, has filed a number of patents around the new technology, and said it could be deployed anywhere in the world, thanks to its reliance on unlicensed spectrum.

Mark Richardson, operations director at Ocado, said: "We set out to create a groundbreaking platform for online retailers the Ocado Smart Platform to push the boundaries of efficiency, modularity and scalability. Working closely with the Cambridge Consultants team has enable us to make our ambitious vision a reality."

The firms believe the Ocado Smart Platform could scale up to handle up to 20 times the movements it does in Ocado's own warehouse, and said it would be suitable to control robots in factories, construction sites and airfields.