HPE wants to bring heavy-duty analytics to the IoT 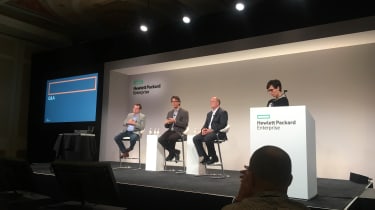 The Edgeline EL1000 and Edgeline EL4000 integrate data capture, control, compute and storage and will, the company said, deliver heavy-duty analytics and insights at the edge of the network. This, in turn, will enable decision making in real time.

Inside the appliances are 64 Intel Xeon cores, a PXI data acquisition and control card from National Instruments and HPE's server remote management technology, Integrated Lights Out (ILO), as well as 15TB of storage. They also both support Aruba's Virtual Intranet Access VPN, while the EL4000 supports Vertica Analytics Platform to provide organisations with immediate data insights from their IoT initiatives.

"This is a fundamental shift in the way we compute and do analytics (sic) of the big data from the IoT, but it also converges things that have never before been combined," said Tom Bradicich, VP and GM of servers in a press conference at HPE's annual Discover conference.

"We're taking a chunk of the datacentre and we're shifting it out to the edge to do ... deep compute," Bradicich added.

Aruba, which is part of HPE, made a simultaneous IoT announcement with new features for its ClearPass technology, allowing it to profile devices and determine if they are safe or not.

"Our IoT security technology is focused on transforming untrustworthy IoT devices into trusted IoT data that can then be leveraged by businesses," Michael Tennefoss, VP of strategic partnerships at Aruba, said.

"Our network access control system is called Aruba ClearPass. It is a network access control system that manages when devices come onto the network and it incorporates a unique feature called adaptive trust," Tennefoss continued. "It trusts no device and no user until proven otherwise. What we're announcing is a new extension to ClearPass that's called IoT Device Profiler. What this capability does is automatically identifies devices ... fingerprints them and determines whether they are trustworthy or not."

Should the device fail the test, it will be sandboxed straight away and never connect to the corporate network. Those that are trusted are permitted access, but with additional restrictions placed on what it can and cannot do.

Finally, HPE also announced a number of customer service and consultancy propositions to help customers with their IoT projects.

It has not yet been announced when these new services and products will become available, nor how much they cost.