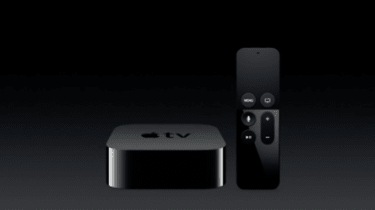 Apple TV is Apple's audiovisual streaming device that has for some time been the poor relation of the Cupertino-based firm's computing hardware range.

Apple's TV range is now in its fourth generation, with a fifth rumoured to be in development and speculated to be revealed later this year.

Here we round up everything you need to know about Apple's answer to Chromecast and Roku, as well as its tvOS operating system.

Apple has announced a new Apple TV model, with support for 4K and HDR technology.

As rumours predicted, the new box uses one of Apple's A10X Fusion chips, with more than 50% faster performance and improved graphics speed.

The company is also announcing that 4K films and TV shows sold through iTunes will be charged at the same price as HD content. On top of that, any existing HD content that customers have purchased will be automatically upgraded to 4K at no extra cost.

The company will be working with Netflix and Mazon to bring the respective companies' original programming to Apple TV, complete with support for HDR and 4K technologies. Live sports will also be supported.

The new Apple TV 4K will start at $179, and will be available for pre-order from September 15, shipping September 22.

The new Apple TV is set to be called Apple TV 4K and will be powered by an A10X Fusion CPU and have 3GB RAM.

The discovery was unveiled by developer Steven Troughton-Smith, as part of the golden master (GM) code leaked on Friday. The code was reportedly leaked by an Apple insider, and has information about the new iPhone X and iPhone 8 models, the LTE Apple Watch Series 3 and now the Apple TV.

…I guess three cores would make it the A10X Fusion. Correction!

The new chip will increase the compute and graphics performance and may be required to play 4K 60fps content which users can shoot with the new iPhone 8 and iPhone X, according to 9to5Mac.

The RAM has increased too; necessary because of the size of the bandwidth and cache size that are normally required to stream 4K video.

Apple are set to officially unveil the new iPhone tomorrow and a range of other devices too. It's set to be a big event considering that it's the iPhone's 10th anniversary. However, major details about the devices were leaked on Friday.

The event will be available to watch on an iPhone, iPad or Mac via Safari or through Microsoft 10's Edge browser. It is taking place at the Steve Jobs Theater in California on 12 September at 10:00am PST.

Ahead of its 'Special Event' event on 12 September, Apple has rolled out a new beta version of its tvOS 11 developer build.

The new update, which was released on Tuesday, is built to run on fourth-generation Apple TVs, adding some user exprience changes to the UI and some support for some of Apple's newest hardware.

tvOS 11 beta, the tenth of its kind, adds automatic light and dark mode switching depending on the time of day, new background modes, home screen sync, and the option to pair AirPods to the TV.

The majority of the changes are focused on fixing various bugs in the software, likely an indication that Apple is gearing up to release the full version on 12 September.

The changes were initially only available to those users who are registered as developers, however a free public version of the build has since been released.

tvOS 11, as well as iOS 11 and updates for macOS Sierra and watchOS 4, are expected to make an appearance during or after the event next week, where we're also likely to see the release of the iPhone 8.

07/09/2017:Apple has updated the Events app on Apple TV ahead of its "Special Event" next week, which is widely expected to herald the arrival of the iPhone 8.

Apple takes a very proprietary view of its event streaming and traditionally it could only be watched on an iPhone, iPad or Mac via the inbuilt Safari browser, or on Apple TV via the dedicated Special Event app. However it's recently added Windows 10's Edge browser to that lineup.

The update to the Apple TV hub is fairly minor. As with the events sent out to the media a week ago, it stated that this will be "the first ever Special Event held at the Steve Jobs Theater in Cupertino, California", with date and time details (12 September, 10.00am PST). Videos from previous events in September and October last year, and WWDC this year, are available to watch on demand in the meantime.

In other Apple TV news, the company has also reportedly recruited four "veteran TV executievs" to join its video content team, according toVariety.

This comes after Amazon stopped selling the Apple TV previously, allegedly because Apple refused to allow Amazon Prime Video content to appear on its device. The firms appear to have come to an understanding now however, with Amazon shows like The Man in the High Castle coming to Apple TV in the next few months.

Apple CEO Tim Cook also stated that further updates regarding Apple TV would be shared later on in the year, indicating that a new hardware generation will indeed be launched before 2018 - possibly at the same time as the next iPhone.

05/06/2017: It's likely Apple will give us the first glimpse of tvOS 11 at WWDC, speculated to power a fifth-generation Apple TV device expected later this year.

If the company follows the same release schedule as last year, we will see an early build of the software at Apple's developer conference, with a full launch due in September.

The latest version is rumoured to addthe ability to switch between different accounts on Apple TVs. Currently, each TV is tied to individual Apple IDs, and the only way to access shared content is through a limited Family Sharing feature in iTunes Movies.

The new feature would allow different users to access their own iTunes and iCloud libraries, as well as potentially allowing for personalised Home screen layouts.

This certainly makes sense given the fact that Apple TVs are by design shared devices, rather than a personal iPad or iPhone. It also paves the way for future Siri integration, which would allow Apple's assistant to save individual user profiles.

For all the latest news and rumours coming out of WWDC, head to our hub.

tvOS 11 is likely going to power a new generation of Apple TVs, with both expected to be revealed alongside the iPhone 8. The latest refresh of the operating system, tvOS 10, first appeared at WWDC 2016 and was later released September 2016. Since then it has had a handful of updates, most recently 10.2.1 on 15 May.

While specific details have yet to be announced, we have a few improvements we'd like to see in the next OS:

It is currently a bit of a chore to navigate the TV's App Store, particularly when it comes to searching for a specific type of content, such as a shooting game. An overhaul of the categories and subcategories would make it much easier to find what you're looking for, particularly as the Store continues to expand.

Apple needs to make it easier to manage screensavers, as the process of downloading and applying the video you want is overly convoluted. For example, you don't get to select which of the files you've downloaded to set as a screensaver. While there is more control when you use your own pictures, Apple's screensavers are great, so it's a shame they're so complicated to use.

One of the best features on the iPad is the Split View mode, allowing users to work across two screens or watch two videos at the same time. Confusingly, this feature is missing from tvOS, even though it seems a natural place for it. It would be great to be able to watch Netflix and order food at the same time.

The fourth generation of Apple TV went on sale in October 2015. A fifth generation is likely to appear later this year alongside tvOS 11. As of 12 May, Apple TV costs 129 for the 32GB version and 169 for the 64GB version. Both prices include VAT.

There is also an Apple TV remote control app available on iOS devices, allowing for the use ofplayback controls, touch navigation, Siri integration for using voice commands and text input via the on-screen keyboard.

Siri has also been upgraded. Not only can it now search movies and TV shows by topic, it can also search and tune in to live TV, and search YouTube.

In terms of streaming formats, it supports AirPlay natively and others via apps. Streaming services supported at the time of writing include iTunes, Apple Music, Netflix, Now TV, BBC iPlayer, ITV Player, All 4 and BT Sport.

Apple TV's 'universal search' includes support for channels such as VH1, Comedy Central and MTV, which are available through the Search app.

For more information on the latest Apple TV unit's specs and features, as well a full review, visit our sister site Expert Reviews.

In June 2016, analyst house HIS revealed that, in the US, twice as many Chromecasts had been sold as Apple TVs (3.2 million vs 1.7 million). This has been primarily attributed to the fact that, at $149 before tax, Apple TV costs over four times as much as the $35 Chromecast (ex VAT).