Decent manuals would be helpful, but Beronet offers a clever combination of PBX host and gateway 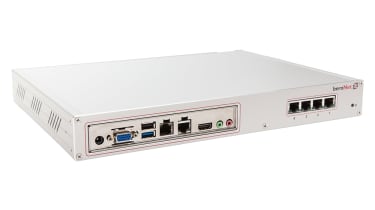 If you'll excuse the clich, Beronet's Appliance 2 is truly a system of two halves. One side comprises standard PC hardware for hosting your choice of PBX software, while the other adds an integrated media gateway that lets you continue using your existing landline or ISDN systems in parallel with your new VoIP PBX. It's versatile, too: the chassis can sit on a desk or be mounted in a rack, and the aluminium casing serves as a heatsink so it's completely silent.

The PC portion of the appliance is built around a 2GHz Intel Celeron J1900 processor, with 4GB of DDR3 memory and a 60GB SSD. If you're planning on running multiple VMs, you can opt for 8GB or 16GB of memory, and larger SSDs up to 240GB. The gateway was supplied with Beronet's hybrid dual BRI/FXS module, but plenty of other choices are available. Options include BRI, FXO, FXS, T1 or GSM ports, and there's room for two cards as well.

The appliance itself is Linux-based, but uses the Xen Project hypervisor so you can set up your PBX within whichever guest OS you want. It can also host a virtual router or firewall, making it a complete communications hub in a box.

Installation is a two-phase process. Although the PC and gateway are aware of each other, each has its own independent web interface to configure. We found the accompanying documentation unhelpfully brief, but a quick call to Beronet's support staff helped to reassure us that everything was set up the way we wanted. We can't help think it would be in Beronet's interests, as well as that of end users, to create a more extensive guide.

Once you know how, the gateway is actually quite easy to configure. We placed two PSTN ports in a group and selected the appropriate country dial tone from the dropdown list. Inbound and outbound dial plans needed to be created, and then we provided our Sipgate account details and credentials. With this done, we were able to make and receive calls using our SIP account via a standard PSTN phone plugged directly into the gateway.

For call logging, the gateway console provides basic phone port statistics, plus a list of active calls, complete with the caller's number.

The appliance's PC portion offers a simple dashboard for viewing and controlling VMs. You can create multiple virtual machines, and choose how many CPU cores and how much memory each one should use.

Your chosen OS can be installed by uploading an ISO file to the appliance from the web or a CIFS share. The interface also offers a direct link to Beronet's Market, which provides a repository for PBX and firewall apps that can be downloaded and installed on the Appliance 2.

For our test, we created a Windows 10 VM and set it up for remote control via VNC, using the link in the dashboard. The system felt a tad sluggish, but we had no problem copying the 3CX installer over to the VM and installing it. Following this, we were able to carry out all further configuration from the 3CX management console.

Wizards made it easy to set up the appliance's media gateway and create rules, such as whether outgoing calls from specific extensions would be routed via the PSTN gateway or SIP trunk - or whether a prefix could be used to specify a particular route. We also created backup routes, so that if our internet connection was down, calls would be automatically routed over the PSTN line.

The lack of decent manuals may have made deployment significantly more complicated than it should have been, but Beronet's Appliance 2 is a clever device integrating IP PBX virtualisation with legacy gateways. It's reasonably priced and, overall, a good choice for businesses that want to migrate to VoIP without totally abandoning their PSTN or ISDN installations.

Deployment significantly more complicated than it should be, but Beronet's Appliance 2 is a clever device integrating IP PBX virtualisation with legacy gateways. It's reasonably priced and a good choice for businesses that want to migrate to VoIP without totally abandoning their PSTN or ISDN installations.