But only the latest smartphones will benefit 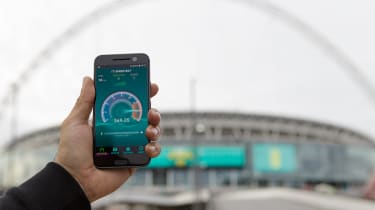 EE has upgraded its 4G network to offer much faster speeds - but only for some smartphone users.

Its Cat 9 network should ensure a speed bump for all devices connecting to its network, and customers using HTC M10, Samsung Galaxy S7 and S7 Edge and the Samsung Galaxy Note 7 handsets should get the full benefit.

"We've invested in our network to ensure that all of our customers get the most out of the amazing smartphones they have, and can keep up with the highest speeds that the latest devices offer," said EE CEO Marc Allera.

The lab-based maximum for a Cat 9 device is 450Mbps, according to EE, and the HTC M10 just achieved a real-world speed of over 360Mbps on the EE network at Wembley Stadium. HTC claimed that this was the fastest speed customers could achieve in the UK and equal of anywhere else in the world.

EE had switched on its "4G+" network a couple of years ago to support Cat 6 devices. This uses two blocks of mobile spectrum, and is available in more than 150 towns and cities across the UK.

The next phase to support Cat 9 devices will enable access to a third block of spectrum for high-speed 4G services in more than 500 sites across these towns and cities by the end of 2017.

To enable these speeds, EE combines 20MHz of 1800MHz spectrum with 35MHz of 2600MHz spectrum to create 55MHz of spectrum deployed for 4G services.

The upgraded network is live around Wembley Stadium and more sites in central and east London are set to go live later this year, including Tech City in east London. The network should reach Manchester and Birmingham next year.