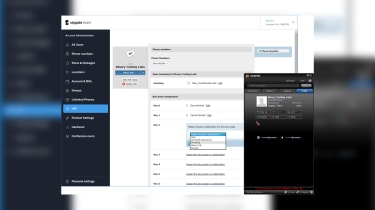 Small businesses that want a cloud VoIP service that can grow with them will find Sipgate Team a good choice. Its flexible contracts keep costs firmly under control as you can instantly upgrade or downgrade your plan at a time of your choosing.

The Light plan starts at 14.95 per month and includes support for three users which equates to a mere 5 each. The catch is it doesn't include calls to landlines and mobiles, which are charged to your account as they are made.

For heavy usage, it makes sense to add the UK or EU call packages which start from an extra 30 per month and include all VoIP calls to UK and EU landlines and mobiles, regardless of their duration. You can also request single or blocks of local, 0845, 0870 and international numbers while for a one-time fee of 20 per number, you can port over existing landlines.

Sipgate posts you a start code as a security measure and to verify your postal address as the one shown when emergency calls are made from your account. It took two days to arrive, but the time wasn't wasted as we spent it familiarising ourselves with Sipgate's features.

The web portal opens with an event list showing calls made and received, along with access to voicemail messages, SMS and faxes. From the admin section, we created new users and it's clear that Sipgate Team isn't geared up for a large user base, as it doesn't have an import function and requires user details to be entered manually.

As with RingCentral Office, we had to manually configure our Yealink T23G desk phones - but fortunately like RingCentral it didn't take long, as the Sipgate support site provided screenshots of their web interface showing where the user's SIP account details should be entered.

Unlike RingCentral, Sipgate doesn't provide its own softphones but supports many free and paid-for third party apps. We used Zoiper's free Windows and iOS apps and found both to be simple to configure for our user accounts.

Along with hard and soft IP phones, we added details of each user's mobile and customised their call forwarding and hunting rules. You can create multiple rulesets, each using a wait time of up to 45 seconds, after which incoming calls are transferred to another extension, an external number, a mobile or voice mail.

Place selected users in a group with a dedicated phone number and extension and when it's called, all their phones will ring. Custom greeting messages can be assigned to groups and users by uploading an MP3 file or using the portal's Click2Record feature which calls a phone and uses it to record welcome messages.

Costs will start to creep up but the Pro package starts from 10 extra per month and enables call queuing, presence BLF (busy lamp field) and interactive voice response (IVR) services. The latter provides a virtual switchboard with up to 10 voice menus and key press options to direct callers to the right department or person.

Other optional features include a conference room which allows up to 25 Sipgate Team users and customers to participate using PIN-free dial in. Monthly costs are 36 but this includes 5,000 conference minutes per month and it costs the same amount to enable call recording.

Setup does require some manual labour but we don't see it as a deal-breaker as there's plenty of online help available. Sipgate Team is a great cloud VoIP platform for small businesses and its flexible plans and options mean that unlike some other providers, you won't be paying for features you may not need.

Sipgate Team is a great cloud VoIP platform for small businesses and its flexible plans and options mean that unlike some other providers, you won’t be paying for features you may not need.