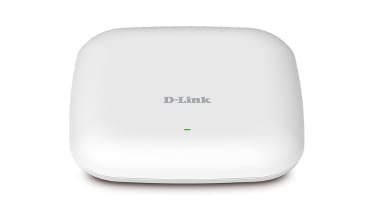 A business-class 802.11ac wireless access point for a shade over 100 is a tempting deal. Furthermore, it's a flexible offering: D-Link's DAP-2660 can be deployed in standalone mode or managed using the free Central Wireless Management (CWM) software, which can handle up to 500 APs.

For medium-sized organisations, D-Link's firmware-based AP Array feature will appeal in particular, allowing you to manage up to 32 APs on a local network without requiring any extra software. You simply set up one AP as the master, then create a backup master and configure the rest as slaves: any configuration changes or upgrades made to the master will then be automatically synchronised to all of the other array members.

As a standalone business access point, the DAP-2660 ticks all the important boxes, supporting concurrent 2.4GHz 802.11n and 5GHz 802.11ac operations with up to eight different SSIDs for each radio.

It's powered via a Gigabit PoE port. Note that if you want to use it over regular Ethernet, the external power adapter is offered only as an optional extra.

Our test deployment took barely two minutes. We pointed a browser at the AP's default IP address and were greeted by a simple, well-designed interface, which offered quick access to all features. However, note that the DAP-2660 defaults to both radios enabled with their SSIDs unsecured but it's simple enough to set an authentication scheme, and enabling the multi-SSID feature allows you to assign different schemes for each one. In addition, tough enterprise-level WPA is on offer, and a clever touch is that the access point can authenticate for you with its own internal RADIUS server.

The AP can also present a captive portal that redirects your users to a custom web page asking for credentials such as usernames and passwords, LDAP account details or passcodes. We had no problem uploading custom login web pages into the AP, and setting different ones to be presented for each radio and SSID.

Upload and download traffic controls can be applied, with different settings for each SSID. Quality of service (QoS) is supported too, with options available for web, mail and FTP traffic, along with a Manager that can prioritise traffic for specific clients using their IP or MAC addresses.

Wireless performance is good. Close-range file copies from a desktop equipped with a Netgear AC1200 USB 3 adapter completed at a decent average of 52MB/sec. Moreover, at a distance of 10m this fell only marginally to 47MB/sec. We have no complaints about the DAP-2600's coverage, either: the SweetSpots app on our iPad registered a connection dropout only at a distance of 41m away, with five other offices between us and the AP.

To test large-scale manageability, we installed the CWM software on a Windows 10 desktop, and then added the relevant AP modules for the models we wanted to monitor. The main dashboard is very basic, and opens with pie charts showing APs, radios and connected stations. You can set up multiple sites and define associated SSIDs, security, access controls and authentication. These are then exported to a separate installation utility that discovers APs on the network and pushes the selected profile to them.

After deploying profiles to our APs, we were able to monitor CPU usage and radio traffic, but there's very little detail and every time we wanted to change a wireless profile we had to re-export it and push it to our APs.

Overall, it's hard to complain about Central Wireless Management software as a free utility, but it isn't a patch on the cloud portals offered by other rivals. Nevertheless, the affordable D-Link DAP-2660 takes some beating for wireless features, and it has a very good turn of speed as well.

The affordable D-Link DAP-2660 takes some beating for wireless features, and it has a very good turn of speed as well.