BT's new device tries to spread a wireless signal around the home using various routers- what do we think of it? 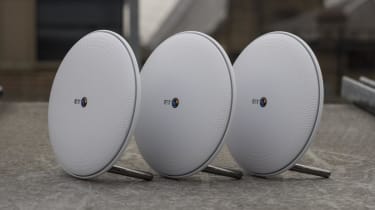 After years of living in the shadows, suffering the merciless bullying of disgruntled internet users, the humble wireless routers is at last fighting back and BT's Whole Home Wi-Fi is in the vanguard. It's part of a new wave of multi-box wireless "mesh" systems that are aiming to forever banish dead spots and blanket your home with strong, solid Wi-Fi.

The concept is a pretty simple one. By spreading the wireless signal around the home using not a single router, but many, you get a strong signal everywhere. And because these systems are built with ease of use in mind by one manufacturer, they're typically simple to set up and maintain.

While it's certainly possible (and much cheaper) to use wireless repeaters to extend the reach of your network, the improved range they offer typically comes at the expense of simplicity of setup and performance.

This is a relatively young product type, so the market isn't awash with alternatives right now. Until now, the most impressive system we've come across is Netgear's Orbi. Designed to replace your single-box wireless router, Orbi comes as a two-box system, one hub connected to your broadband and one satellite placed a short distance away to spread your network that bit wider. There's also the Sky Q multi-room TV system, in which each TV box doubles as a wireless access point.

To get Sky Q, though, you need to subscribe, and Orbi is expensive, costing 370 for the two-box starter kit. BT's solution is cheaper at 299 and includes an extra wireless access point, giving you potentially wider coverage than Netgear Orbi.

BT's system works a very similar way to the Orbi and, just like that system, it's designed to be completely plug-and-play. Download the app, run through step-by-step instructions, and you'll be up and running in minutes.

It's a very simple process: you connect the first disc-shaped wireless unit via from its single Gigabit Ethernet port to your existing wireless router. Once this automatically configures itself, you're ready to plug your second and third discs in, which automatically pair up with the first and establish a simple "mesh" network. 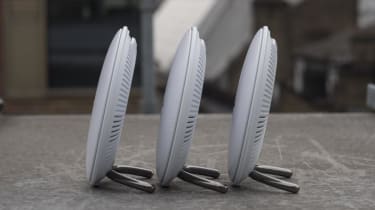 You can place the discs wherever you like, but to get the best coverage and the strongest speeds, the app monitors signal strength and lets you know if you could do better by positioning the second and third satellite discs closer to the hub.

Once you've done this, you've pretty much finished with the setup. There's nothing else to do other than pluck the plastic tab from the rear of one of the router discs, and enter the preconfigured security key into all your devices.

Although BT Whole Home Wi-Fi offers dual-band connectivity -- each disc is effectively a 4x4 MIMO 802.11ac router offering speeds of up to 1,733Mbits/sec over 5GHz and 800Mbits/sec over 2.4GHz -- it doesn't surface two separate networks in the way a normal wireless router would.

Instead, the system uses a technique known as band-steering to assess each connected device and hook it up to the most appropriate frequency band and to the disc offering the strongest connection. It's a system that does genuinely seem to work. 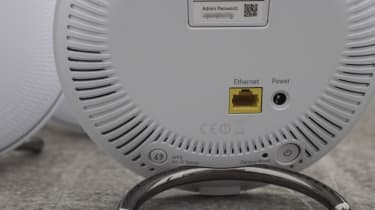 The one misstep here is that the BT Whole Home Wi-Fi system insists on creating its own separate wireless network from your original wireless router's; if you don't want your devices automatically connecting to your old, inferior network, you'll either have to disable wireless on that router or go around deleting the old network from all your devices. That's not ideal.

Still, if that's the only inconvenience, we're willing to put up with it. The app itself is very easy to use and get to grips with, and we particularly like the "pause" button, which allows you to temporarily shut down Wi-Fi household-wide. A handy tool for parents who find it a challenge to get their children to put down their devices and actually take part in conversation.

What's most impressive is that performance is stellar across the board. We tested it at home, where the usual setup is a Sky Q wireless mesh network, and it blew it away in terms of both range and throughput speed.

At the home where we were testing it, the broadband connection comes in on the first floor at the front of the house, and this is where we carried out our first, close-range test. Using an Apple MacBook Pro 15 equipped with a 3x3 stream Broadcom Wi-Fi adapter as the test client, we saw an average throughput of 89MB/sec to (yes, that's megabytes, not megabits). 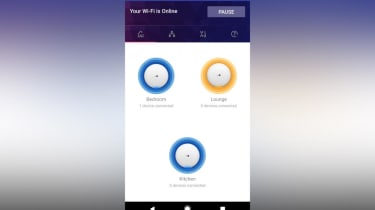 That's up there with the best standalone routers we've tested; it's faster than the BT Smart Hub and more than twice as quick as the Sky Q Hub, which itself is no slouch.

Next, we moved down one flight of stairs and into the kitchen at the rear of the house. Note that, when setting up the system, we tried to replicate as closely as possible the positions of the various Sky Q access points and booster boxes in our original network. We only tweaked the positions slightly on the advice of the BT Whole Home Wi-Fi app.

Now, we would normally see throughput speeds of around 8MB/sec on the Sky Q network in the kitchen, but the BT Whole Home Wi-Fi system flew past it with an average throughput of 36MB/sec. That's easily strong enough to stream 4K Netflix via a Chromecast Ultra, and it's double the speed the BT Smart Hub was able to muster in that position. 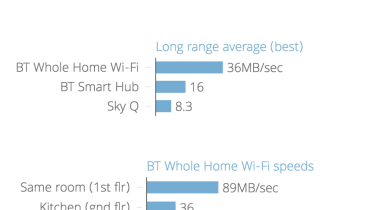 Your numbers will be different from ours, of course -- every household is different -- but what's promising about the performance of the BT system is that even in the trickiest of spots we were getting a strong signal and decent throughput. That can only be a good thing.

It's difficult to say if BT's Whole Home Wi-Fi is the best you can buy, because it's just one product in a field that's about to get a whole lot more competitive. We haven't tested Linksys' Velop system yet, but that promises equally impressive coverage and speed. Then there's Devolo's GigaGate, which is cheaper but more basic in terms of the features it offers.

What's clear, though, is that BT Whole Home Wi-Fi achieves what it sets out to -- and then some. It delivers solid range and impressive throughput to parts of the home that single-box routers struggle with; it's remarkably easy to set up, and it's more affordable than Netgear's Orbi system. If you've always struggled to get strong wireless coverage across the whole of your house, it's well worth considering.

BT's multipoint wireless system is fast, reliable and pricey -- but it's worth it