The club is installing Aruba in their new stadium 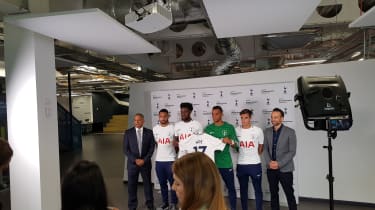 Tottenham Hotspur announced yesterday that it has chosen Hewlett Packard Enterprise as its official IT networking and wireless infrastructure partner for its new stadium.

The north London football club are currently building their new, world-class stadium at White Hart Lane which is set to open in 2018. The club claims it will be one of the most technologically advanced stadiums ever built. It is set to have a capacity of 61,559 and will host other events such as NFL games and concerts.

The club has underlined the importance of technology in the new stadium and it is investing in it now for the future. With Aruba, the club hopes to enable connectivity across the entire venue for visitors and flexibility to cater to future demands.

Mark Waters, UK and Ireland Managing Director of HPE, said that football venues are no exception to the impact of digital on businesses. "Digital strategy is a business fundamental, it's a non negotiable if you want to compete, [and] if you want to out-compete the marketplace" he said.

Sanjeev Katwa, head of technology at the football club, said with HPE they aim to create one of the most technologically advanced stadiums in the world. He added: "We chose HPE because of their capabilities."

Katwa underlined how technology was part of the design of the building and through it they are looking to the future too. "We're planning infrastructure here that actually is not just for year 1, or day 1, it's 'how do we scale upwards as time goes on?'" he said.

Katwa believes that there are only a few football clubs that "put technology as one of the top things they do". He said that the take up of connectivity and wireless infrastructure in stadiums in the UK is really poor, and he believes "only two or three" have really done anything. He said this was the same for Europe as not many venues have solutions. In the US, however, "it's almost a given".

Tottenham plan to use the stadium not only for football matches, but also NFL matches as they have a two games per season agreement with the NFL. The club also hopes to host concerts and other events in the future.