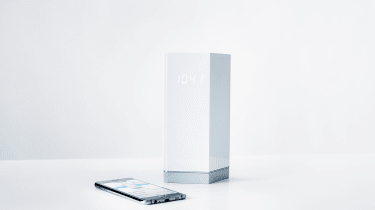 In the default mode, Sense builds up a profile of your smart devices, too. By monitoring the patterns of traffic and where the devices are talking to, Sense can see what's normal. Should your devices suddenly start sending loads of data, or communicating with known command servers (the parts that run botnets), Sense can automatically warn you and block internet access to that device.

Additionally, Tracking protection can be turned on, which will prevent websites and criminals tracking you through the web. We recommend turning this on. At the minimum, it will prevent so many tracking adverts from following you around, making the web nicer to browse.

From the app's main screen you can see your current network status, including whether any threats have been blocked. You can tap the threat count to find out what, specifically, was blocked.

Go to the Devices section, and you can see a list of connected machines. Where possible, Sense pulls the device's name or manufacturer, to help you identify what each product is. You can also override each device, rename it and choose a more meaningful icon. If Sense is struggling to pull any meaningful information (we had one device that identified as being from a Chinese manufacturer), you may want to go round your home and turn everything off. Then, turn on each device one at a time, so you can see what's connecting to your network and label it accordingly.

An option called "Identify Device Type" is available in Settings, but this currently just looks for Android and PC devices, and then warns you if they don't have the protection software installed. A future update promises to add IoT device reputation-based protection, which will detect the types of device on your network and provide specific protection for each one.

Select any device in the list, and you can choose to block the internet, which is a handy way to get the kids' attention when it's dinner time. It's a shame that schedules can't be configured at the moment, and we hope that this is part of the advanced parental controls update. Finally, the device status page shows you how many threats have been blocked, and if the device is OK or potentially compromised.

Sense currently has very simple networking controls. There's port forwarding (provided you use the iOS app), you can change the name of your wireless network, and you can change the DHCP range. That's it, and there's no control over the finer details of your network settings. Despite the fact that there's only one network listed, the Sense actually creates two networks: one 2.4GHz network and a 5GHz network, with '_5GHz' appended to the network name. 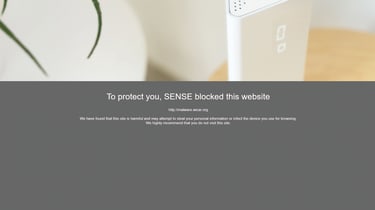 There's no guest network option, although this feature is also due to come in a future update, along with an integrated VPN. There's no option for UPnP, which is good in one way, given that the technology is so insecure; however, this means that some devices may not work correctly, and will have to be manually configured using port forwarding.

Of course, all updates are applied automatically to the router, reducing the traditional risk that the firmware goes out of date, leaving any flaws open to be exploited.

There's little point in additional security if performance isn't up to scratch. Internally, the router is a 802.11ac model, with AC1750 speeds (450Mbit/s 2.4GHz and 1,300Mbit/s 5GHz). That makes this a mid-level router, and our speed tests showed this.

If it's speed that you're looking for, then the Linksys WRT3200 ACM would be the best choice. Alternatively, a product like the BT Whole Home Wi-Fi could be connected to the Sense: it offers greater speed at distance, and even extended our Wi-Fi coverage into the entire garden. The only downside is that there's no option to disable the Sense router's Wi-Fi.

With all of that said, the F-Secure Sense is still an interesting product, genuinely improving the security of every device that's connected to your home network. However, in its current state, there are few too many omissions for us to wholeheartedly recommend it: it needs the updates to add much-needed features, the Android app needs to provide the same configuration options as the iOS version, and it would be much better if the Sense could replace your old router. Updates are due to come, improving things, so you may be better waiting for these before buying.

A clever router that protects every device connected to your home network, but it's currently lacking a few features.