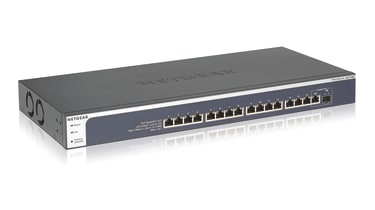 Netgear is a high flyer in the SMB network switch market, offering an unbeatable combination of features and value. Its new XS716E aims to cement that position, bringing fuss-free 10-Gigabit (10GbE) switching within reach of any small businesses. The proposition makes a lot of sense: with so many servers and NAS appliances now 10GbE-ready, it's an instant way to expand network bandwidth and remove bottlenecks to critical applications.

Positioned at the lower end of Netgear's Smart Managed switch portfolio, the XS716E has sixteen fixed 10GBase-T ports, plus a single SFP+ fibre port. The latter is dual personality, sharing its link to the backplane with the sixteenth copper port, so you can't use both at the same time.

Don't get this switch confused with the older 16-port XS716T, which has two SFP+ dual-personality ports. Costing around 110 more, this model offers more advanced features, including 802.1x authentication and Auto-VoIP - plus Netgear's "Layer 3 Lite" which supports IPv4 and IPv6 static routing, VLAN routing and ARP.

Installation is as plug and play as it gets, with two management models to choose from: you can use either the switch's own built-in web server, or Netgear's free ProSafe Plus configuration utility. This provides full access to all the same features as the web interface, and can also discover and manage multiple switches from one interface.

The web console worked fine with Microsoft Edge and provides easy access to all features. You don't get any glitzy switch graphics (as you do with the XS716T), but it's easy enough to check on switch and port status. The port list shows the negotiated connection speed - you'll want to leave auto-negotiation enabled, as the only manual options are to disable ports or set them to Fast Ethernet speeds. Loop detection can also be enabled, and you can decide whether or not to allow the switch to be accessed by the ProSafe Plus utility.

VLAN options extend to the port and 802.1q varieties, and in both cases, you can use basic or advanced configurations. Advanced port-based VLANs, for example, allow ports to be members of more than one VLAN. Ports can also be placed in up to eight link aggregation groups (LAGs) for high-speed, fault-tolerant trunks. However, these can only be static and not dynamic, as the switch doesn't support 802.3ad and LACP (link aggregation control protocol) groups.

QoS (quality of service) lets you assign one of eight priorities to each port, with a minimum bandwidth applied to each one. The switch also supports 802.1p and can detect these fields and assign the priority defined in the packet.

Alongside all these technical capabilities, the switch also features some clever power saving technology, with support for the 802.3az EEE (Energy Efficient Ethernet) standard. With this enabled, the switch automatically detects cable lengths and adjusts power accordingly for shorter runs; disconnected ports have their power slashed to a minimum, decreasing overall power consumption and heat output.

That's not to imply that the XS716E is by any means a power hog. We measured the unit on its own consuming a mere 19W, and adding 10GbE links to our server and storage arrays saw consumption rise by only 2W per connection. The cooling fans run very quietly too.

The monitoring tab provides basic information about port traffic, with tables of bytes sent and received for each one although, unlike the XS716T, the XS716E doesn't support SNMP or syslog servers. However, if you have a network analyser you can use the port mirroring feature to send traffic from all selected ports to the one it's connected to for further analysis. There's also a cable tester that could prove useful: it'll check whether cables are functioning correctly, and if it finds an electrical fault and it'll tell you roughly where the fault is in metres.

The Netgear XS716E brings high-speed networking to the masses at a record-breaking price of less than 60 per 10GbE port - a value proposition other vendors can't hope to compete with. You don't get the full set of features found on more expensive switches, but for SMBs seeking a fuss-free speed boost for their network it's the perfect choice.

The Netgear XS716E brings high-speed networking to the masses at a record-breaking price of less than £60 per 10GbE port – a value proposition other vendors can’t hope to compete with. You don’t get the full set of features found on more expensive switches, but for SMBs seeking a fuss-free speed boost for their network it’s the perfect choice.