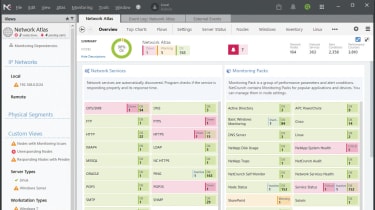 AdRem's NetCrunch comes in two versions, with Premium aimed at small business with up to 300 monitored nodes and Premium XE targeting larger companies. The latter provides features such as prioritized monitoring, an IP SLA sensor for Cisco devices and alert correlation, and both versions are licensed on the number of monitored nodes.

Installation on our Windows Server 2012 R2 host took around 10 minutes, after which a wizard automatically identified available subnets and guided us through our first network discovery. Accuracy was good and it found our Windows and Linux servers, switches, routers and printers - although it thought our Windows 10 desktops were running Windows 8.1.

The NetCrunch console is a work of art, with its Atlas summary screen furnishing us with a colour-coded overview of our network which can be customised using drag and drop. Web browser access is also available, although the interface only provides a subset of functions while mobile access is via a browser and is similarly restricted.

AdRem's Monitoring Packs neatly organise sets of performance monitors and alert conditions, and most of these are assigned to systems and devices for you during the discovery process. These include ones for Windows system monitoring, general node and service status, Active Directory, Linux, DNS, DHCP and many more.

Each Pack icon keeps a running tally of all outstanding problems along with their severity levels. To see which systems are affected, just click once on the relevant Pack and it'll pop a window up showing the errant systems.

Monitoring Packs are provided for Hyper-V and VMware hosts and offer plenty of insight into your virtualised environments. NetCrunch provided full performance statistics for our ESXi host along with the status of each VM, and we could add selected VMs to the Atlas dashboard as separate monitored entities.

Selecting the Atlas Nodes option presented a list of all monitored systems -- again with coloured icons showing their alert status. Problems are easy to diagnose as details alongside each system show which Pack has an issue plus a brief explanation of why.

Basic alerting scripts are created for you and assigned to the relevant Packs. These can be easily customised to suit and escalation scripts used to define a sequence of alerts when something goes pear-shaped.

We used actions in our scripts so NetCrunch would carry out a set of commands when specific events occurred. There are plenty of actions to choose from which include rebooting a system, restarting a Windows service or running a program.

The Top Charts view keeps you in the loop about oversubscribed systems and services. We could see which systems had the highest CPU and memory usage or were running out of disk space, and each chart can be repositioned to suit using drag and drop.

NetCrunch can receive NetFlow and sFlow streams and the dashboard has a separate pane for this traffic. It only shows the past 15 minutes or one hour, but can identify 150 common applications and provides graphs with detailed flow analysis.

SMBs that want a big support department DefCon display will love the free GrafCrunch server as it uses NetCrunch as a data source and displays real-time graphs of monitored systems. It's easily customised, but you should only use Google Chrome to access it as we found other web browsers had serious problems logging in to the NetCrunch data source.

It does require a Windows Server host but AdRem NetCrunch impresses with its ease of use and slickly designed console. Affordable for budget conscious SMBs, it delivers a fine set of features and its node-based licensing schemes allow it to scale easily with demand.

AdRem NetCrunch impresses with its ease of use and slickly designed console. Affordable for budget conscious SMBs, it delivers a fine set of features and its node-based licensing schemes allow it to scale easily with demand.