The kit means developers can add object, facial and animal recognition to their projects 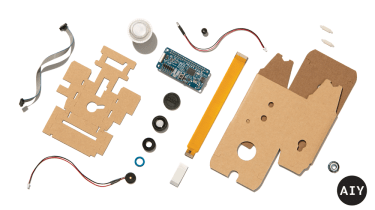 Google has announced the AIY Vision Kit, opening up a new way for Raspberry PI users to access its AI tools. The kit comprises a low-power Intel Movidius MA2450 circuit board and computer vision software that can be tagged onto an existing Raspberry Pi computer and camera modules.

The circuit board provides the ability to run neural networks on the device rather than having to add on an external source for processing the data or use a cloud processing system.

The software includes access to three TensorFlow-based neural network models - one based on MobileNets to recognise objects, one to recognise faces and human facial expressions, while the third can identify the difference between a human, a cat and a dog.

"We've also included a tool to compile models for Vision Kit, so you can train and retrain models with TensorFlow on your workstation or any cloud service," Google's Billy Rutledge, its director of AIY Projects said.

"We also provide a Python API that gives you the ability to change the RGB button colors, adjust the piezo element sounds and access the four GPIO pins."

Google said its AIY Vision Kit could be used for a whole range of applications, including identifying plants and the individual species, monitor where your dog is in your home, see when your car left the driveway and recognise emotion - for example, whether your guests like your home decor.

This is the second product released in the AIY line by Google. Its AIY Voice Kit was released in May and enables Raspberry Pi developers to build a standalone voice recognition system using Google Assistant, or users can add their own voice recognition and natural language processing to projects.