Swift Playgrounds: Everything you need to know

Apple wants to help get kids coding with a new, free iPad app. We run down the details... 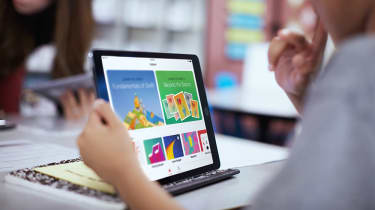 Apple's WWDC developer conference opened yesterday, and the company was keen to highlight its focus on young programmers, with CEO Tim Cook mentioning that the youngest developer at the conference was a nine-year-old girl.

As part of this emphasis on younger coders, Apple also launched an education tool to help kids get to grips with programming for iOS, called Swift Playgrounds. Here's everything you need to know about it.

Swift is the programming language that Apple uses for all its software. This includes iOS, macOS, watchOS and tvOS, allowing developers to easily port their applications between Apple devices. Swift also supports Linux.

As of the latest release, Swift is completely open source, with freely-available source code, developer resources and documentation. This means that anyone can get started developing Swift applications without expense.

What is Swift Playgrounds?

Launched at WWDC 2016, Swift Playgrounds is an iOS app for iPad, designed to teach kids how to use the Swift programming language. It includes a series of step-by-step lessons and challenges to explain the fundamental elements of Swift.

In order to make programming more intuitive and less intimidating, the lessons in Swift Playgrounds are framed as games. Kids use basic commands to guide an animated charater, Byte, around a prebuilt cartoon environment.

Kids can immediately see the effects of their code, which gives their programming a sense of immediacy, as well as letting them easily visualize any errors in their code.

What tools and features does Swift Playgrounds have?

Programming can often be a somewhat fiddly task, especially divorced from the traditional mouse and keyboard interface used by most developers. To combat this, Apple has included some tools and shortcuts to make tasks quicker and easier.

One is the Snippets Library, which allows users to quickly drag and drop commonly-used code elements from a handy repository. Not only does this minimise typing, it also gives kids access to commands they might not otherwise think of.

Elsewhere, there are time-saving editing functions, like the ability to edit in place. Simply tap a number, and a pop-up keypad will let you edit the value. Users can also drag the boundaries of a statement to include or exclude specific code lines.

Swift Playground also has its own dedicated keyboard, designed specifically for programming, which includes commonly-used programming symbols such as parentheses and square brackets. Hold down a key to access multiple characters, then drag to select the desired one.

Another addition is QuickType for code, or in other words: autocorrect for developers. The shortcut bar will display intelligent suggestions as users type, which can be tapped to automatically fill out the desired string.

When you're ready to start developing an app in earnest, you can even export code directly from Swift Playgrounds to professional developer tool Xcode and keep working on it.

When can I get Swift Playgrounds?

Swift Playgrounds will be released on the app store in the Autumn. It will be a completely free download, so you can pick it up and get started right away. The developer preview of the software is available now.