CEO Jim Whitehurst explains that without a means to scale, software firms should be turning to open source 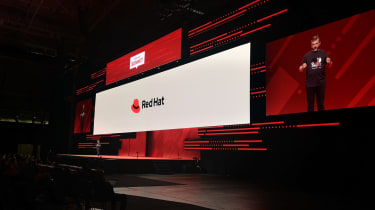 Open source is a curious business. It's an industry guided by the work of citizen developers that puts working together at the core of its ethos, yet is still capable of producing massively successful technology brands. It flies in the face of what we have come to know from traditional proprietary software development and licencing, but when a company like Microsoft changes its stance from staunch opponent to leading proponent, the phrase "open source is the future" starts to make absolute sense.

Yet, perhaps, the most intriguing part of open source is its ability to provide a competitive advantage in a highly volatile industry - something which Red Hat CEO Jim Whitehurst believes has been fundamental to his company's success. In its position as perhaps the biggest and most successful open source company, Red Hat has grown from a position of relative obscurity to one of influence among the world's largest software companies. According to Whitehurst, Red Hat is "built on the shoulders of giants", and it's for this very reason that IBM chose to acquire the company for a cool $34 billion in October.

For Whitehurst, Red Hat is an oddity in the traditional software market. Economies of scale drive most markets today, with those capable of sustaining an advantage over their competitors by ramping up production. For many, this can be simply producing more of a particular product than anyone else, or doing it for a much lower cost. For software companies, competitive advantage is difficult to sustain.

"There's no scale really in software," explains Whitehurst. "It's so individual in terms of developers, [who] can be hired away, that it's unclear you can create a capabilities-based advantage.

"I think the simple reason is that it's hard to come up with a source of advantage that makes you better at coming up with the next big thing than some startup or someone else."

Building and maintaining that advantage has become a principle concern for Whitehurst, something which he believes Red Hat now has thanks to its continued close relationship with the open source community. It's business model relies on the work of a wider collaborative community, iterating on top of and channelling existing software to solve challenges of modern business.

"I truly believe that Red Hat does have a sustainable source of competitive advantage around our capability to work in upstream communities and catalyse that and turn it into enterprise products," explains Whitehurst. "The reason it's different than most software companies is that most software companies can go hire ten developers and pool the right knowledge they need - you can hire ten people at Red Hat and it doesn't matter, because it's not knowledge you need, it's a culture that drives our ability to engage in upstream communities and engage with customers, and how we create products."

However, it's the company's ability to capitalise on new trends, seemingly before most others, that has made it such a force in the software industry.

"We went from leader in Linux to leader in OpenStack to a leader in containers - the reason we can do that is that we can catalyse communities across those things," says Whitehurst. "You have very few companies that have ever been able to do that, and I would argue we'll be able to do it in other categories in the future."

However, the open source approach, which permeates the company as a whole, is a challenge to maintain in terms of staffing. A great deal of time is devoted to not only ensuring that employees are skilled enough, but also possess the right temperament to thrive in an open source environment.

"Our big focus this year is to better define manager behaviours that we expect from our managers that we think are most accretive to our culture," explains Whitehurst, "because what people say, what people do, and how they spend their time are the soft cues that reinforce culture. We want to be even more directive with our managers to say, 'hey these are the things that are most accretive to supporting our culture'".

And it's an abrasive culture at that. From talks with executives and employees affectionately known as Red Hatters, it's clear that the collaborative approach to development often leads to open challenge and disagreement, something which is actively encouraged and likely a shock to new starters.

"Innovation requires constructive conflict," explains Whitehurst. "A lot of people come to Red Hat and say 'oh I bet you guys are happy and you're growing so fast', and then they come in [to meetings] and they say 'oh, that's really harsh'."

This culture is something that both IBM and Red Hat have had to manage as part of the acquisition. "We'll have these meetings [with IBM] and they're all so nice and polite, and [internally] we'll be like, 'that sucks!' or 'that's ridiculous' - and we're just used to operating that way - we don't mean it in a bad way, we assume positive intent.

"So we coach on positive intent, we really try to drive passion around the mission and purpose around open source, but we really do try to encourage this kind of creative abrasion which a lot of people feel is really harsh, but we really think that's how the best ideas emerge.

"We look for cues when we're hiring people - what were they passionate about in the past, what gets them really energised, and can we direct that towards our mission. There's being comfortable with ambiguity because when you're innovating you have to be comfortable with ambiguity. And frankly, a relatively thick skin, because we do praise a lot when things go well, but if people disagree they're very happy to say 'that's a really bad idea'.

"That takes some getting used to, but it's such a core part."