Windows 9 could have interactive live tiles 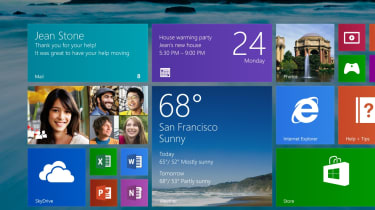 New leaks from Winbeta regarding Windows 9 (or Threshold) have teased the possible introduction of interactive live tiles and a centralised notification system.

Microsoft's latest operating system, set to be released in late September, has been rumoured to feature live tiles that allow the user to interact with apps without opening them fully. This has already been glimpsed on the new-look start menu for Windows 9.

Leaked screenshots show the freshly reintroduced start menu with two columns instead of the traditional single column set-up, with the right-hand side of the menu sporting the live tiles and apps. This marks the first time since Windows 7 that the classic start menu has been included in a Microsoft operating system, though with some improvements.

It hasn't been confirmed when users can expect the return of the start button, but it is strongly believed that they will have to wait for the next big Windows release, rather than one of the various Windows 8.1 updates.

A new notification centre could also be included with Threshold, according to The Verge, which will be similar to the Action Centre on various versions of Windows Phone.

This is yet another step towards integrating certain features across both Windows PCs and Windows phones and tablets.

Apple is also set to introduce similar features with the upcoming iOS 8 update, with 'actionable widgets' making it much easier for users to interact with apps and respond to notifications. This will be included on the iPhone 6 when it is released later in the year.