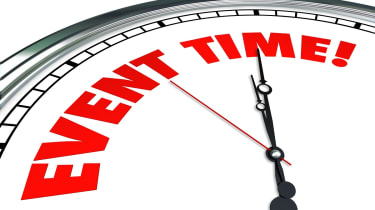 Windows 10 has been unveiled at a Microsoft event in San Francisco.

Our roving reporter is in the room where all the magic will happen right now, ready, willing and able to bring you the news as it happens. Stay tuned! 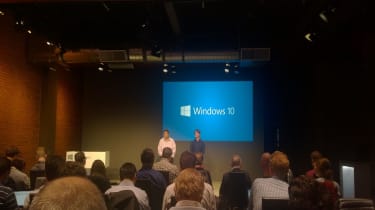 Because we were too enthusiastic in our tweeting, Twitter has very unhelpfully blocked us because it thinks we're a robot. So follow our live updates below now instead. Thanks for bearing with us while we worked through the tech issues!

20:26According to a just-published (or just accessible given the demand) Microsoft blog,Windows 10 will be "our greatest platform ever for organizations and their employees." That's a pretty big statement to make to enterprise users. Can MS deliver?

Jim Alkove, Windows enterprise program management team lead, said: "There are several reasons that business customers in particular should take notice of Windows 10. It's not just morefamiliarfrom a user experience standpoint. We have built so much of what businesses need right into the core of this product including enterprise-gradesecurity, identity and information protectionfeatures, reducing complexity and providing a better experience for the modern needs of business.

"We'vesimplified management and deploymentto help lower costs, including in-place upgrades from Windows 7 or 8 that are focused on making device wipe-and-reload scenarios obsolete. We're also providing businesses withmore choicein how quickly they adopt the latest innovations, and are delivering continued improvements based on customer feedback."

19:59Microsoft's press materials have finally made it through the web security guards. We were worried they weren't on the 'list' for a while. Here's what Terry Myerson had to say: "Windows 10 represents the first step of a whole new generation of Windows, unlocking new experiences to give customers new ways to work, play and connect.

"This will be our most comprehensive operating system and the best release Microsoft has ever done for our business customers, and we look forward to working together with our broader Windows community to bring Windows 10 to life in the months ahead."

To recap on new features available in the TP version of Windows 10:

And, while Microsoft hasn't confirmed any details about pricing, it did say that Windows 10 management and deployment would be much easier and simplified in order to help lower overall costs.

19:02 And it's all over. That hour has gone so quickly. In Oscar speech-style, we'd like to thank Twitter et al for all their support. Oh, wait no...

When asked just how much life is in Windows 10 (how rude, it's not even been born yet!), MS talked up its mission-critical support and suggested there's at least 10 years (10, geddit?!) of life in the old, sorry new, OS yet.

When asked about Apple (and Google) vs Microsoft in the enterprise space, MS responded that Windows 10 is its "effort to respond." It says it wants to build the best product possible to delight customers. Although will it be enough to get loyal Mac OS fans to defect?

Windows 10 will be designed to support apps already out there on the Windows Marketplace.

When asked whether MS can build something that has what both consumers and businesses will want, the answer was a bit awkward. No details of how it will be released to these two audiences, as yet, according to Microsoft.

18:43OK, post Build conference next year. Build was in April this year, but when exactly is it next year? Why so vague MS?!

18:40Microsoft has promised it is building a product customers will LOVE. Users will most definitely be the judge of that.Though MS has said user feedback will be key to achieving this. Fair play.

18:39 Windows Insider Program launches tomorrow, 1st October for testing by developers (and other interested parties perhaps pretending to be developers) and to keep them abreast with all the Windows 10 development news in the run-up to release.

18:35Windows 10 will provide a task view when you swipe left to right. This all sounds a bit familiar. Old school, even?

18:32Microsoft claims it is trying to cater for both Windows 7 users and Windows 8 users who like the familiarity of the OS and the touch UI. It claims Windows 10 will cater to both sets.

You can now copy and paste directly into the

Command Prompt. For those who want to do that kind of thing.

18:27The new Snap Assist feature will let users grab apps from more than one desktop. This should please those who need to multi-task (which seems to be the new norm).

18:13What's more, Microsoft promises Windows 10 will be compatiable with all the systems and tools enterprises are already used to working with.

18:12Businesses need to start looking at Windows and what it can do from them early on (from an evaluation standpoint) so Microsoft is planning on starting those discussions today.

18:11According to TerryMyerson, Microsoft's head of OS, it wouldn't be right to call the new OS Windows 9. Other than frustrating a load of industry watchers, we're unsure as yet just why that is.He also saidthe new OS will work on the broadest range of devices to date, and will be enterprised-focused.

He also described it as Microsoft's most comprehenisve "platform" to date. So, could Microsoft be hinting that Windows 10 will, as many have suggested work across PCs, tablets and smartphones? Time will tell... and hopefully we will know before the end of the next hour!

18:09We're having a few technical issues with our integrated Twitter feed (words will be had!), but the news so far is it looks like we all have egg on our faces in terms of the new OS being called Windows 9. Windows 10, anyone? Either that or it's an elaborate joke by the software giant...

Check out our thoughts about what Microsoft's next-generation OS should include as features: Windows 10 - 10 features we want to see