Adoption of Windows 8 and 8.1 shot up in October, marking the OS’ biggest leap in market share to date

The market share for Windows 8 and Windows 8.1 saw a significant rise between September and October 2014, indicating that users may finally be coming round to the operating system's charms.

In September, Windows 7 was in the lead with 53 per cent, with the stubborn Windows XP hanging around with 24 per cent and Windows 8.x coming in third with 12 per cent combined market share. Mac OS X and Vista were next with 4 per cent and 3 per cent, respectively. 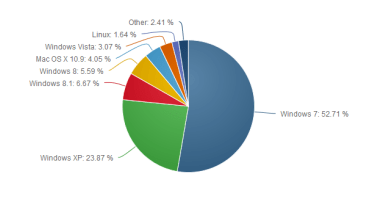 The surprise news comes with the difference between these numbers and those reported by NetMarketShare for October, then.

Though Windows 7 actually saw some growth, Windows XP fell to 17 per cent and Windows 8.x rose by around 5 per cent to almost 17 per cent combined market share. Most of this comes from the Windows 8.1 update, but new adopters don't seem to have dented the numbers of the standard version of Windows 8 too much. 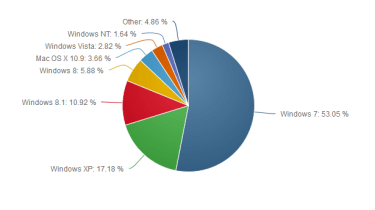 The surge in Windows 8.1 adoption could continue now Microsoft has ceased sales of Windows 7 and 8 in preparation for the release of Windows 10 in 2015.

Windows 7 Home Basic, Home Premium and Ultimate will no longer be sold, starting from 31 October, and Windows 8.1 will be the default operating system pre-installed on new PCs.

The last-minute success of Windows 8 and 8.1 is good news for Microsoft, who has had trouble luring consumers away from older operating systems like Windows XP, despite withdrawing support for the OS in April 2014.