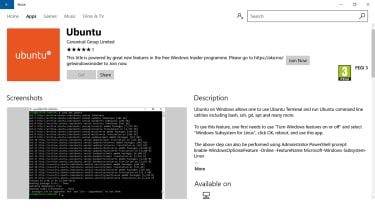 Open-source operating system Ubuntu is now available to download and install from the Windows Store, Microsoft has announced.

The Linux-based OS is available to download and install for anyone on Windows Insider build 16215 and above, and will shortly be rolling out to all users running the Fall Creators Update.

Rather than the full desktop Ubuntu image, complete with Ubuntu's graphical user interface, this method of installation allows developers to run Ubuntu's terminal and command line utilities, such as bash, git and ssh.

This means developers can launch Linux from Windows' existing command prompt and Powershell tools, and it hugely important for developers. Rather than needing to spin up a Linux image in a VM, devs can script and test their Linux code natively within Windows 10.

SUSE and Fedora will also be bringing their Linux distros to the Windows store in the coming weeks, and when multiple distros are available, users will be able to install and run them side-by-side.

"We would like to extend our sincerest thanks to the great teams at Canonical, SUSE and Fedora for all their patience, hard work & support as we worked together to plan, build & publish their distro packages in the Windows Store," said Microsoft senior project manager Rich Turner in a blog post announcing the change.

Windows Server 2016, the company's server-side counterpart to Windows 10, will also be made compatible with Windows Subsystem for Linux  the compatibility layer that allows Linux to run on Windows  later this year.

Microsoft is making a big push to embrace Linux users; last year, it launched the cross-platform .NET Core framework at a Linux conference, expanded support for Linux distros on its Azure cloud platform and enabled native Linux workloads and containers on Windows Server.

Munich's head of IT has blasted the city's decision to switch back to Windows from Linux, stating that there are no "compelling technical reasons" to make the change.

For the past nine years, Munich has been running its public sector It on Linux-based workstations, but the city recently moved to end this program. A recent report indicated that the decision was based on compatibility issues caused by the Linux client and LibreOffice productivity suite, as well as higher OpEx costs than anticipated.

Karl-Heinz Schneider, head of the the city's IT service provider IT@M, told German industry publication Heise.de that the decision came as a shock. "We solve compatibility and interoperability problems by providing MS Office, mostly virtualised, at workplaces that need to work together with external offices on office documents," he said.

He also claimed that any IT failures were not down to LiMux (the specific Linux variant built by IT@M), but down to the fragmented nature of the city's IT setup, where control is divided between IT@M as well as local authority IT departments.

Munich politicians disagree, however. CSDU party member Kristina Frank said at a recent meeting ahead of a council vote on LiMux's fate that "most workplaces in Germany and worldwide are running other clients. Linux may be the right choice for many users but it's not for Munich".

"Our LiMux client fundamentally works but it's not efficient or intuitive and there are regular problems when you have to add other software, regular compatibility problems."