The program will become available in the Windows Store 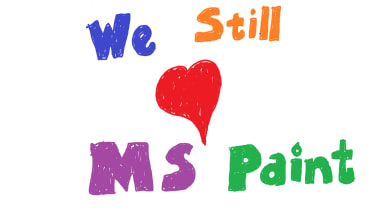 Microsoft has confirmed that it won't be axing its venerable Paint application, after news that the software was being deprecated sparked a wave of outrage among devoted doodlers.

The company yesterday published a list of software that is set to be either removed or deprecated with the forthcoming Windows 10 Fall Creators Update. The list included Outlook Express, the Reader app and, most notably, MS Paint.

Paint, which has a 32-year legacy as part of Windows operating systems, is marked for deprecation, meaning that it is "not in active development and might be removed in future releases".

However, many people took this to mean that Microsoft would be dumping the beloved app in favour of the newer Paint 3D software, introduced with the previous Creators Update.

Fans of Microsoft's old-school art software took to the internet to protest its removal, sharing some of their best creations made using the app and imploring the company not to remove it.

In response, Microsoft published an official blog post yesterday confirming that while Paint may disappear from Windows 10's default list of apps, it will soon appear in the Windows Store for people to download.

"Today, we've seen an incredible outpouring of support and nostalgia around MS Paint," wrote Megan Saunders, general manager of Microsoft's 3D for Everyone initiative. "If there's anything we learned, it's that after 32 years, MS Paint has a lot of fans. It's been amazing to see so much love for our trusty old app."

"Amidst today's commentary around MS Paint we wanted to take this opportunity to set the record straight, clear up some confusion and share some good news: MS Paint is here to stay, it will just have a new home soon, in the Windows Store where it will be available for free."

Saunders also pointed out that many of the old program's features are available as part of Paint 3D, and emphasised that the newer version will keep receiving new features.