A quarter of all machines are still running the legacy OS, although the numbers are falling 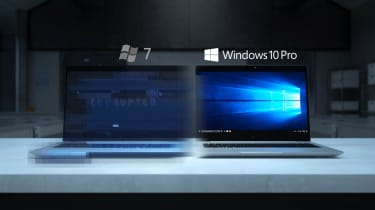 The market share of Windows 7 devices has slid marginally between December and January, but the now-legacy operating system still holds a quarter of the desktop market.

Approximately 25.6% of the desktop OS market comprised Windows 7 devices towards the end of January 2020, which amounts to a 4% market share dip against recorded figures of 29.6% in December 2019.

This is despite the fact that Microsoft dropped mainstream support for Windows 7 on 14 January.

This activity was mirrored in the Windows 10 market share, according to the latest figures from NetMarketShare, with the proportion of devices running Microsoft’s flagship OS climbing from 53.4% to 57.1%.

The figures represent the widest month-on-month decline in the Windows 7 market share since May 2016, which is as far back as records are available via NetMarketShare.

The fact that a quarter of desktop units are still running Microsoft’s legacy system, however, may become the cause of concern to the industry giant. 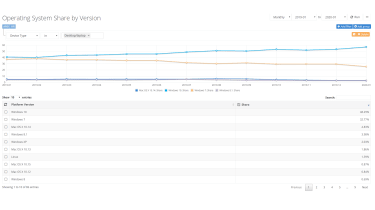 Extended support is only available to a handful of organisations, meaning a large proportion of Microsoft customers are currently running software that may be vulnerable to potential security threats.

A handful of times during 2019, Microsoft extended several of its schemes offering organisations updates beyond 14 January, either on a paid-for basis or free of charge.

In August, for example, Enterprise Agreement and Enterprise Subscription Agreement customers with active Windows 10 Enterprise and Microsoft 365 subscriptions were eligible for a promotional offer giving them 12 months of Windows 7 updates for free.

Its extended support programme, meanwhile, was widened to cover small and medium-sized businesses (SMBs) as late as October 2019, with the company citing “challenges in today’s economy” facing its smaller customers.

Various pieces of research last year, including a study by Kaspersky, suggested an alarming proportion of businesses were still reliant on legacy systems such as Windows 7 and XP as recently as last year.

The fact that Microsoft altered its extended support policies, lowering the barrier to entry to extended support updates in the months running up to the end-of-life date, suggests the company was aware that migration to Windows 10 was slower than expected.

Indeed, the crossover moment at which Windows 10 became more widely-used than Windows 7 happened just over 12 months ago during December 2018. Moreover, Windows 7 entered its ‘terminal decline’ phase only last year, falling sharply by 38.4% to 36.52% between February and March 2019.

IT Pro approached Microsoft to ask whether it feels the migration of Windows 7 devices to Windows 10 is too slow, or whether this is on track.