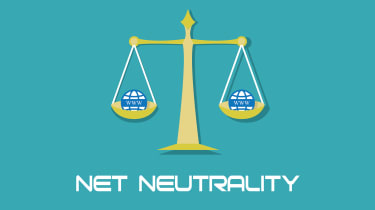 The Federal Communications Commission (FCC) plans to hand over regulatory oversight of US internet service providers to another federal agency when net neutrality laws are revoked.

The FCC and the Federal Trade Commission (FTC) have entered into a 'Memorandum of Understanding', a draft agreement that will see the two agencies work together to ensure internet service providers stick to their promises to maintain a free and open internet, but critics believe enforcement would happen well after any infringements occur.

FCC chairman Ajit Pai announced plans last month to scale back current net neutrality laws that prevent ISPs from throttling speeds, restricting access to certain web content, or charging more for faster access. The rules, which were introduced under President Obama in 2015, are expected to be reversed when the Republican majority FCC gathers to vote on Thursday.

Pai said the move would "return jurisdiction to the FTC to police the conduct of ISPs", and that they would both "work together to take targeted action against bad actors", according to Reuters. The FCC has overseen ISPs under Obama's net neutrality rules, effectively classifying the internet as a public utility - this wouldn't be the case under the FTC.

Under the Restoring Internet Freedom Order, expected to replace net neutrality laws, agencies would no longer prevent ISPs from charging more for faster access, but instead require them to disclose whether they are placing restrictions on traffic, or favouring specific websites over others.

The agreement would see oversight return to the FTC, which will be able to investigate the activities of ISPs if they are considered to have deceived the agencies and customers over their practices.

However, the memorandum has been criticised by fellow FCC Commissioner Mignon Clyburn, who alongside Jessica Rosenworcel represents the Democratic minority on the commission.

"The agreement announced today between the FCC and FTC is a confusing, lacklustre, reactionary afterthought: an attempt to paper over weaknesses in the chairman's draft proposal repealing the FCC's 2015 net neutrality rules," said Clyburn, speaking to Ars Technica.

Critics also argue that the proposed changes essentially allow ISPs to commit to whatever guidelines they choose to follow and that ISPs are already making moves to take advantage of the relaxing of net neutrality regulations. Comcast, one of the largest providers in the US, immediately deleted a "no paid prioritisation" pledge from its website, on the same day that Pai announced his plans.

"Not only is the FCC eliminating basic net neutrality rules, but it's joining forces with the FTC to say it will only act when a broadband provider is deceiving the public," said Chris Lewis, VP of broadband advocacy group Public Knowledge. "This gives free reign to broadband providers to block or throttle your broadband service as long as they inform you of it."

In an open letter to senators and representatives who have oversight of the FCC, they said: "We are the pioneers and technologists who created and now operate the internet, and some of the innovators and business people who, like many others, depend on it for our livelihood.

"The FCC's rushed and technically incorrect proposed order to repeal net neutrality protections without any replacement is an imminent threat to the internet we worked so hard to create. It should be stopped."

The US is set to repeal net neutrality laws established to prevent the monopolisation of internet traffic by larger companies.

The plans were unveiled by Federal Communications Commission (FCC) chairman Ajit Pai, a noted opponent of net neutrality rules who has already removed a number of regulations since his appointment by president Donald Trump.

The proposal will be voted on when the FCC meets on 14 December. The five-seat body is currently controlled by a Republican majority, and Pai's plans are expected to be approved with few issues.

"For almost 20 years," Pai said in a statement, "the internet thrived under the light-touch regulatory approach established by President Clinton and a Republican Congress."

"Under my proposal, the federal government will stop micromanaging the internet. Instead, the FCC would simply require internet service providers to be transparent about their practices so that consumers can buy the service plan that's best for them."

The FCC currently classifies internet providers as utilities - meaning that they are not allowed to artificially limit the speeds of certain web traffic or to charge certain companies more than others to allow customers to access them.

In practice, the removal of net neutrality rules means that US broadband providers could be free to throttle internet speeds for customers trying to access websites and services that aren't their commercial partners, effectively creating 'fast lanes' and 'slow lanes'.

For example, if a broadband provider owns its own video streaming service, it could greatly slow down - or even outright block - traffic to rival services like Netflix.

Equally, ISPs could charge customers for access to fast lanes that stream games or movies.

Let me explain net neutrality in the most horrific way: if FCC dismantles it, and you get internet from Verizon, they may force you to use YAHOO as your search engine (because they own it), but PAY to use GOOGLE. Would you like that? If not, you SUPPORT #NetNeutrality.

Alongside the net neutrality rollback, Pai has also announced his intentions to remove restrictions on telcos that prevent them from reaching more than 39% of US households - a further effort to prevent monopolies.

The move has been roundly condemned by digital rights and internet advocacy groups, who claim that removal of the rules will cripple competition and innovation, creating a market where only major companies will be able to afford speedy connections to customers.

"The FCC's new approach invites a future where only the largest Internet, cable, and telephone companies survive, while every start-up, small business, and new innovator is crowded out," said Electronic Frontier Foundation legal director Corynne McSherry, "and the voices of nonprofits and ordinary individuals are suppressed. Costs will go up, as ISPs take advantage of monopoly power to raise rates on edge providers and consumers alike."

Consumers appear to share this view. In fact, a poll of president Trump's own voter base conducted by competitive networks association Incompas in July found that 70% felt that the internet has improved in the two years since president Obama enacted the net neutrality regulations.

The prospect of repeal has also drawn criticism from major tech companies like Google, Facebook and Netflix, who fear the destruction of the 'open internet'.

"We are disappointed that the proposal announced today by the FCC fails to maintain the strong net neutrality protections that will ensure the internet remains open for everyone," Facebook vice president Erin Egan said in a statement.

Conversely, telcos welcomed the news, saying that the decision will put the reins of innovation back in the hands of private investors without being hampered by excessive government oversight.

US telecoms giant AT&T called the rules a "brief and ill-conceived experiment", and stated that consumers have little to fear.

"Make [sic] no doubt, the circulation of this order will bring the 'sky is falling' crowd to the fore, and they will foretell a day when websites will be blocked, content censored and internet access controlled by ISP overlords," wrote Joan Marsh, AT&T's executive vice president of regulatory & state external affairs. "Such claims, while great for fundraising, are as nonsensical now as they were a decade ago when they were first prophesied."

"Importantly, the adoption of this order will restore the careful balance needed between ensuring internet freedom while continuing to attract private investment in broadband facilities - investment that is essential to delivering on the promise of broadband for all Americans."

The FCC, for its part, has pledged that it will maintain a close watch on the practises of ISPs after the repeal.

According to the New York Times, officials said that the throttling of content could be viewed as a breach of competition regulations, and that such breaches would be investigated by the Justice Department or the Federal Trade Commission.