Don’t rip up the rulebook, rip up Ofcom 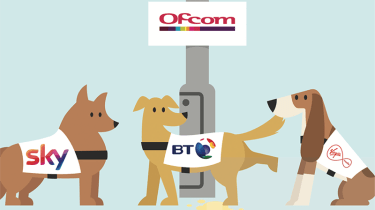 If insanity means doing the same thing over and again and hoping for a different result, then telecoms regulator Ofcom must be absolutely off its rocker.

Earlier this month, Ofcom published the fourth revision of its Broadband Code of Practice Bad COP, for short. A whole nine years after it first promised to make broadband providers clean up their act and deliver the speeds they were advertising, this latest rewrite of the rulebook will "impose tougher requirements on internet providers". Which isn't hard, because the last set of rules were so weak they were practically homeopathic.

The headline act in this latest set of rules is Ofcom letting customers leave their contract if their actual speeds fall below a stated minimum. Except Ofcom has tried this before originally in 2010, when it said customers should be released from contracts if their speeds fall "significantly below" what was promised.

What counted as "significantly below"? Fetch yourself a stiff drink, take a deep breath and try to get your head around the following line from the 2010 Code: "If asked to explain further or asked to define 'significantly below', the ISP should provide information on the access line speed achieved by the bottom 10th percentile (or above) of the ISP's similar customers ('the minimum guaranteed access line speed') and explain that if the customer's actual access line speed is below the minimum guaranteed access line speed, then it will follow the process set out in the 4th Principle." Got that? No, neither did anyone else, which is why literally nobody was ever released from their contract for poor speeds.

Then Ofcom had two more stabs at Bad COP in 2011 and 2015, when the code was "strengthened" to permit consumers to break their contract if speeds fell below a stated level and the provider was unable to improve the line. There was only one problem: providers had an unlimited amount of time to 'try' to resolve the problem before offering customers the right to exit. Honestly, you couldn't make it up.Ofcom claims its new Code has tightened these loopholes, giving providers only a month to fix the line and also letting customers walk free if they have mobile phones and TV as part of the same package. But even if the rules are stronger, will the broadband providers obey them? Not if past evidence was anything to go by.

For example, the old Code forced ISPs to tell customers to contact them if the speed received is significantly below the estimate given. This was mandatory. So how many actually did, according to Ofcom's own mystery-shopper exercise this year? One in five.

Likewise, only two in five mystery shoppers were told that actual speeds may be lower than what they were sold. The broadband providers show as much respect to the 'voluntary' code as dogs show to lampposts.

Ofcom has failed to bring the broadband providers to heel for almost a decade. Not a single provider has been punished for failing to adhere to the code, despite the widespread abuse noted above. We don't need another new set of rules, we need a new regulator.