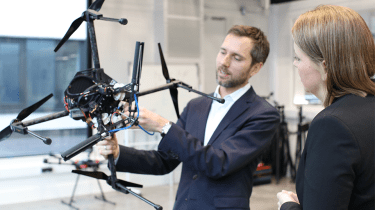 Companies using drones to delivery heavy goods could be forced to register under a new scheme proposed by the UK government.

The draft Drone Bill, which will be published next spring, will require users of drones weighing 250g and over to be registered. Drone users will also have to sit safety awareness tests.

New measures will also make it mandatory for drone owners to register to improve accountability and drone operators will be required to use apps to access the information needed to make sure any planned flight can be made safely and legally.

The government said the measures are intended to allow drone users to continue flying safely and legally. It also said  it wanted the UK to be "at the forefront" of the fast-growing drone industry.

The bill will also give law enforcement officials the right to order operators to ground drones where necessary. Officers will also be able to seize drone parts for use as evidence in any criminal proceedings.

"These new laws strike a balance, to allow the vast majority of drone users to continue flying safely and responsibly, while also paving the way for drone technology to revolutionise businesses and public services," said aviation minister baroness Sugg.

Tim Johnson, policy director at the Civil Aviation Authority (CAA), said his organisation supports the safe development of drones in the UK.

"Drones can bring economic and workplace safety benefits but to achieve those we need everyone flying a drone now to do so safely. We welcome plans to increase drone operator training, safety awareness and the creation of no-fly zones," he said.

The government also announced the launch of its Flying High Challenge, funded by the government and run by Nesta in partnership with Innovate UK.

Up to five cities will be supported in the research and development of drone technology which could transform critical services in for example, emergency health services and organ transport, essential infrastructure assessment and repair, and parcel delivery and logistics.

The government is also working on creating "no-fly zones" by using geo-fencing technology with drone makers. The draft drone bill will be subject to consultation with plans for secondary legislation early next year.