Davos: Theresa May to call on tech firms to meet “fundamental social responsibilities” 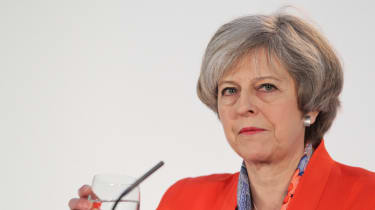 Prime Minister Theresa May will use her speech today at the World Economic Forum in Davos to attack technology giants, calling for the likes of Google and Facebook to "go further" in how they deal with extremist content.

While acknowledging that the technology industry has "some of the best brains in the world", and that the tools it creates has the potential to "transform lives", May will put pressure on search and social media companies to meet "fundamental social responsibilities".

"Technology companies still need to go further in stepping up to their responsibilities for dealing with harmful and illegal online activity," she will say later today.

"These companies simply cannot stand by while their platforms are used to facilitate child abuse, modern slavery or the spreading of terrorist and extremist content.

"We need to go further, so that ultimately this content is removed automatically. These companies have some of the best brains in the world. They must focus their brightest and best on meeting these fundamental social responsibilities."

May is expected to draw focus to the messaging app Telegram, as an example of a smaller service that was associated with the sharing of extremist content, but has since made moves to censor such material.

"Just as these big companies need to step up, so we also need cross-industry responses because smaller platforms can quickly become home to criminals and terrorists.

"We have seen that happen with Telegram. And we need to see more cooperation from smaller platforms like this. No one wants to be known as the terrorists' platform' or the first-choice app for paedophiles."

This line of argument extends from May's previous call for action at the tail end of 2017, demanding that search and social media giants do more to stop the easy spread of extremist propaganda on their networks or face government fines. This comes in the wake of a year that saw a number of major terrorist incidents hit the UK, as well as reports such as one by Policy Exchange that found online jihadi content attracts more clicks in the UK than any other country in Europe. Whether or not the strong words by May and other politicians will lead to action is debatable, given the sheer amount of power companies like Google wield, but tech firms have made some attempt to acknowledge responsibility in this area.

"Clearly not all the consequences of technological innovation are positive," comments Julian David, CEO of techUK. "Issues such as extremist content and child online safety are of real concern to the sector and companies are far from complacent about the work that needs to be done. Tech firms may not always agree with Government on the means but there is no disagreement on the objective to make online platforms hostile environments for illegal and inappropriate content."

Another theme in May's speech is set to be the rise of artificial intelligence, and the UK's role as a leader in the field.

"Right across the long sweep of history, from the invention of electricity to the advent of factory production, time and again initially disquieting innovations have delivered previously unthinkable advances and we have found the way to make those changes work for all our people," she will argue.

Last year the government revealed it would be setting up a Centre for Data Ethics and Innovation, in an attempt to solidify the UK's standing as a thought leader in AI and the many ethical questions it raises. TechUK's Julian David notes: "the UK has an opportunity to be a world leader not just on technology development and but also ethics and governance." However, there have also been concerns about the UK resting on its laurels in this area, and losing pace against the progress of other European countries.