Salesforce in fresh row over US immigration policy after $250,000 donation is rejected 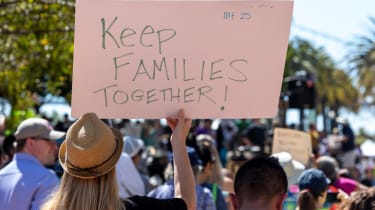 Salesforce faces boycott fears for its work with the US Customs and Border Protection agency (CBP) after a nonprofit immigration advocacy group rejected its $250,000 donation.

Less than a month after the company was criticised for its work with the CBP, company executives offered the Refugee and Immigration Center for Education and Legal Services (RAICES) a hefty donation - only for the Texas-based advocacy group to reject the money.

More than 650 Salesforce employees urged their CEO Mark Benioff in June to review the company's involvement with CBP in light of its role in separating families at the border.

But the company defended its work with the agency, predominantly involving products such as Community Cloud and Service Cloud to modernise recruitment and engage with citizens, saying it was "not aware of any Salesforce services being used by CBP for this purpose".

Benioff later confirmed the company would not be making any changes to its work with CBP, but would by committing $1 million to help families affected by the separation policy.

After pledging $250,000 to RAICES, the organisation said it would only accept the money if Salesforce cancelled its work with CBP. The immigration advocacy group told Salesforce that "when it comes to supporting oppressive, inhumane and illegal policies, we want to be clear: the only right action is to stop" in an email exchange seen by Gizmodo.

RAICES' stance echoes that of 22 Salesforce customers who also this week called for the cloud computing company's CEO to "cut your contract" in an open letter that stated donations are not enough.

"We are nonprofits, startups, and businesses that are Salesforce's customers. The tools that Salesforce provides helps us achieve our mission," the letter read.

"However, we are absolutely appalled that Salesforce is providing assistance to government agencies that are violating human rights. We cannot, in good conscience, ignore this issue.

"We have seen that Salesforce has spoken out against the government's inhumane practice of separating and detaining children.

"We appreciate that and the donation they have pledged to make to affected families. But that is not enough. As long as Salesforce keeps its contracts with Customs and Border Protection, they are still enabling the agency to violate human rights."

A Salesforce spokesperson alerted IT Pro to tweets sent by Benioff outlining the company's position.

"Salesforce always will be true to our core values," he tweeted.

"We dont work with CBP regarding separation of families. CBP is a customer & follows our TOS.

"We dont have an agreement with ICE. I'm Proud of the Men & Women who protect & serve our country every day & I'm Proud of our Ohana."

Hundreds of Salesforce employees have urged their CEO Mark Benioff to re-examine the company's contract with US Customs and Border Protection (CBP) in light of reports detailing its involvement in separating families at the border.

Following Microsoft and Amazon, a petition signed by more than 650 Salesforce employees represents the third major tech company whose workforce has demanded action over their company's involvement with the organisations at the heart of the widely-criticised immigration policy.

Salesforce has been working with CBP since March, offering products such as Community Cloud and Service Cloud, to modernise staff recruitment, manage border activities, and engage with citizens.

But the cloud company's employees "are particularly concerned about the use of Service Cloud to manage border activities", they expressed in a letter addressed to Benioff, obtained by BuzzFeed News.

"Given the inhumane separation of children from their parents currently taking place at the border, we believe that our core value of Equality is at stake and that Salesforce should re-examine our contractual relationship with CBP and speak out against its practices," the letter said.

"We cannot cede responsibility for the use of the technology we create--particularly when we have reason to believe that it is being used to aid practices so irreconcilable to our values.

"We believe it is vital for Salesforce to stand up against both the practice that inspired this letter and any future attempts to merely make this destructive state of affairs more palatable."

The letter has emerged only days after Amazon employees demanded that its public cloud arm Amazon Web Services (AWS) review the use of its facial recognition technology with the US' Immigration and Customs Enforcement (ICE), saying the use of tech was just another opportunity for the government to spy on individuals.

Among widespread backlash in the tech community, Microsoft's staff, meanwhile, also urged their CEO Satya Nadella to cancel the company's involvement with ICE, and any clients who support ICE, in an open letter signed by more than 100 employees.

Salesforce tweeted that it did not endorse the separation of families, and that, to its knowledge, its services were not being used for this purpose.

"At Salesforce, we believe every human life has equal value & every person must be treated with dignity and respect. We stand against forcibly separating children from their parents & implore the govt to enact humane immigration legislation that keeps families together," the company said.

"While U.S. Customs & Border Protection is a customer, Salesforce is not working with CBP regarding the separation of families at the border. We are not aware of any Salesforce services being used by CBP for this purpose. We will always be vigilant & true to our core values."

When approached by IT Pro for comment,  a spokesperson added: "One of the greatest things about being part of the Salesforce family is that we proudly foster an open exchange of ideas and dialogue.

"We're proud of our employees for being passionate and vocal, and will continue the conversation on this and other important matters."