Carnage in the cabinet leads to new appointments 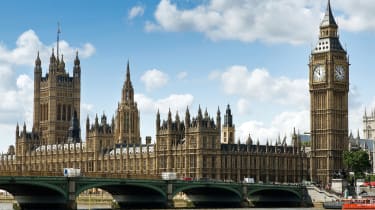 A new leader has been appointed to head up the Department for Digital, Culture, Media and Sport (DCMS), following a major government shakeup that has resulted in the departure of several high-profile cabinet members.

The news comes after several days of chaos, in which rows over the government's approach to Brexit led to the resignations of David Davis and Boris Johnson from their respective cabinet roles of Brexit secretary and foreign secretary.

In the wake of these departures, prime minister Theresa May has been forced to conduct a last-minute reshuffle which has seen Dominic Raab assume the role of Brexit secretary and Jeremy Hunt take Johnson's position as foreign secretary.

Stepping into Hunt's now-vacant position as health secretary is MP Matt Hancock, who previously led DCMS and was widely regarded by the UK tech industry as a good fit for the role. "techUK is very sorry to see Matt Hancock move on from the Digital portfolio," said Julian David, CEO for UK trade industry body techUK.

"As Minister for Digital, then as Secretary of State for Digital, Culture, Media and Sport, Matt has been a staunch supporter of the UK's tech sector both in Government and in other domestic and international fora. His move to lead the work of the Department for Health and Social Care is a clear recognition of the passion, determination and drive we have seen him show at DCMS."

Filling Hancock's place as the head of DCMS is Jeremy Wright. The MP for Kenilworth and Southam has acted as attorney general for England and Wales for the past four years, but his appointment to DMCS marks both his first official role with DCMS and his first secretary of state posting.

Questions have been raised by some as to Wright's suitability for the job a steering Britain's digital sector; although his Facebook page is kept regularly updated, as of his appointment Wright had tweeted just five times in three years, three of which were retweets. Moreover, according to parliamentary records, he has said the word "digital" only twice during his 13-year career in parliament and has voted on only one bill that pertains to the digital economy.

techUK was more pragmatic about Wright's appointment. "All of us here at techUK now look forward to working with Jeremy Wright and Digital Minister, Margot James, to continue to build on the success of our industry," David said.

"As we navigate our exit from the European Union and build a Global Britain, it will be crucial to have a voice at the centre of Government that understands the role the tech sector has to play, not just in creating a prosperous economy, but in finding solutions to society's most pressing challenges."