UK police will have the power to take down drones 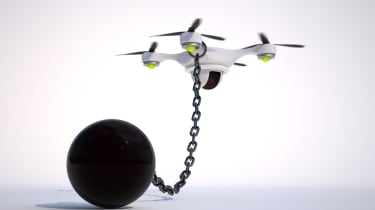 The UK government is consulting on new measures to prevent drone misuse that will allow police to confiscate machines and issue owners with on-the-spot fines.

It is part of a wider programme of new drone legislation that will shape the content of a draft Drones Bill that is set to be published later in the year.

Although the technology has been estimated to have a positive impact on the economy, the government want to make sure there is a set of rules in place to prevent drones from being misused for illegal purposes.

"Drones present exciting benefits to our society and our economy, but with a small group of people choosing to use them for harm there are challenges we must overcome if we are to prevent them hindering the potential of this technology," said Aviation Minister Baroness Sugg.

"That's why we've already introduced safety measures like a height limit, and rules around airports, and today we are consulting on how we go further, including extra police powers and a minimum age requirement."

Under the proposed measures police will have the power to issue fixed penalty notices to those that disregard drone rules and will have counter-drone technology to protect public events and stop contraband reaching prisons.

There will also be a minimum age restriction for drone owners in addition to the new tests they will need to take and proposals for regulating apps on which pilots would file flight plans ahead of take-off.

The government is looking to implement these new rules as the drone industry is starting to take off in the UK. There are already many exciting applications of the technology, such as inspecting national infrastructures like railways and power stations, to aiding disaster relief by speeding up the delivery of blood.

Earlier in the year, a report by PricewaterhouseCoopers (PwC) estimated that drone technology has the potential to increase UK GDP by 42 billion by 2030, highlighting the need for a strong framework to encourage innovation and growth while keeping people safe.