Google to ignore US Senate hearing over political ads 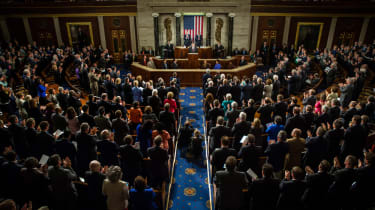 When representatives from Twitter and Facebook attend the Senate Intelligence Committee hearing on Wednesday, there will be one seat left empty, for Google.

The Senate wants to bring the tech companies together to find a solution to regulating digital political ads and to crack down on social media and internet sites manipulating election campaigns and businesses.

Facebook's chief operating officer Sheryl Sandberg and Twitter CEO Jack Dorsey will both attend, but neither Google CEO Sundar Pichai, or the CEO of parent company Alphabet Larry Page, will attend the hearing.

The company had offered to send its senior vice president Kent Walker, but the committee refused and have said the seat will remain empty to highlight Google's absence.

"I know Kent Walker. He's a good guy," Senator Mark Warner said to Wired. "I respect him, but we had the lawyers back in November. This is a hearing that's going to talk about solutions. I think it speaks volumes that Google doesn't want to be part of that discussion. I don't think it's good for them or for coming up with a good solution.

"What I've told the companies is that I don't want this to be a retrospective on what happened in 2016, but I want to know what they're doing to prevent this happening in 2018 and beyond."

In 2016, Russian actors unleashed cyber attacks on the US election system and its political parties and launched what Warner called a "misinformation and disinformation campaign" through social media.

And, while both Facebook and Twitter has faced lots of criticism regarding fake accounts and Russian bots, both have been represented before US authorities. Google's refusal to send its senior executives add further scrutiny to the company, which is already fighting off accusations from President Trump of liberal bias in news results and questions over its plans to build a censored search engine in China.

"I was going to ask them why Google is building a search engine for China to allow Chinese censorship," said Warner. "Maybe they don't want to answer some of those questions. But if Google thinks we're just going to go away, they're sadly mistaken.

"I've had a great working relationship with Google over the years, but I've been generally surprised that they might not want to be part of the conversation about how we fix this and get solutions."