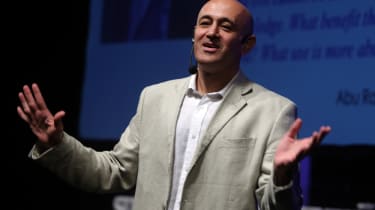 The development of artificial intelligence technology in the UK may suffer from a 'fear-driven backlash' and could potentially lead to an increase in inequality, according to a leading physicist.

Professor Jim Al-Khalili, a broadcaster and the incoming president of the British Science Association, has warned that the fears about AI could stifle adoption, which could mean the technology may never reach its full potential.

Al-Khalili, who is due to speak at the British Science Festival in Hull next week, added that despite the UK being at the forefront of the technology there was a risk of AI being seen as sinister, in much the same way as genetic modification in food.

"There's a real danger of a public backlash against AI, potentially similar to the one we had with genetic modification back in the early days of the millennium," said Al-Khalili.

"If the public becomes disengaged our leaders will see it as less of a priority. Regulations will need to be in place and they may come too late. At the very least, this will result in the technology not being used to its full potential in the public sector, potentially leading to an increase in inequality in society."

One of the regulations proposed by Professor Khalili is for AI to be included in the school curriculum, but stressed that would be like "shifting a giant tanker in the middle of the ocean".

Mirroring the Khalili's suggestion, Rupal Karia, head of public and private sector at Fujitsu, also said that more education is needed for AI's true potential to be realised.

"There is an expectation that the public will continue to embrace new technologies at the same rate," he said. "And while the UK is undoubtedly excited about the digital journey we're on, there is a need for further education and a focus on consumer comfort levels.

A big AI fear often highlighted is it's potential to automate jobs and services and create mass unemployment. Recently the chief economist of the Bank of England, Andy Haldane, warned of "technological unemployment" in an interview with the BBC's Today Programme.

He said that the scale of job loss displacement is likely to be at least as large as that of the first three industrial revolutions.

However, a survey of 2,000 UK respondents from enterprise information management firm, OpenText, revealed a growing optimism around AI in the workplace. Around 35% of respondents said they would feel comfortable working alongside a robot while 23% said they would actively encourage their bosses to hire robot colleagues if it would mean a reduction in their day-to-day admin tasks.