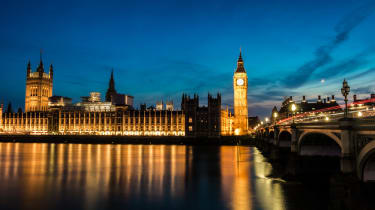 The government has announced a new revenue-based tax on the likes of Google, Facebook and Amazon which is expected to raise 400 million per year.

The UK Digital Services Tax (DST), which will come into effect from April 2020, is a 2% tax on the revenues of search engines, social media platforms and online marketplaces that are profitable, and generate more than 500 million per year in revenue.

Announcing the measure in this year's Budget, Chancellor Philip Hammond said the DST will restore "sustainability and fairness" to the UK tax system, which he suggested tech giants have exploited in the past.

"There is one standout example of where the rules of the game must evolve now if they are to keep up with the emerging digital economy," Hammond told the House of Commons.

"Digital platforms delivering search engines, social media, and online marketplaces have changed our lives, our society and our economy. Mostly for the better. But they also pose a real challenge for the sustainability and fairness of our tax system.

"The rules have simply not kept pace with changing business models and it is clearly not sustainable or fair that digital platform businesses can generate substantial value in the UK without paying tax here in respect of that business."

The UK DST is expected raise just 5 million in its first year, according to Budget papers, and is not projected to bring in the touted 400 million of tax revenue until at least 2022/23.

The measure represents a major shift in the Conservative government's approach to handling an industry that is becoming increasingly influential in the UK economy.

But it has been met with criticism on both sides; either feeling it could hamper the tech sector, or that the announcement doesn't actually go far enough.

"As more and more businesses digitise, the way we levy taxes on companies must evolve and the UK is well-placed, with the strongest tech sector in Europe, to be a leader in this area," said Gerard Grech, chief executive of Tech Nation, an industry trade body.

"However, the announcement by the Chancellor, Philip Hammond, of a 2% tax on revenues of multinational technology companies risks stifling entrepreneurialism and innovation, which recent governments have done much to encourage."

Santosh Sahu, CEO of delivery platform On the dot, branded the tax a "punch into the pockets of tech giants", as well as "stab in the back" for retailers with successful multi-channel strategies.

During his Budget speech, Hammond made reassurances the measure will not be "an online sales tax on goods ordered over the internet", as such a tax would naturally fall on consumers.

"The tech giants do need to pay more in tax," he said, "but the measure announced today is a pittance for these massive international companies.

"Under the Tories, the percentage of tax paid by the big five tech companies has halved since 2013. The new tax isn't even set to be implemented until 2020 at which time the tech giants will start to enjoy a 2% cut in their corporation tax rate."

The Chancellor added that the UK will continue to consult with nations which comprise the OECD and G20 in order to establish an international, cross-border set of measures, with any agreement potentially superseding the UK's unilateral measure.

"The UK has been leading attempts to deliver international corporate tax reform for the digital age," he continued, adding: "a new global agreement is the best long-term solution, but the pace is painfully slow.

Rolling out full fibre and 5G

Elsewhere the government announced a series of investments into digital tools to support the industry, including a 20 million fund for local peer-to-peer networks geared towards business improvement, and technological adoption.

Hammond also announced the government would work in partnership with large banks, professional services firms and tech companies to support the productivity of their small business customers.

The government's National Productivity Investment Fund will also expand to 37 billion nationwide, including a significant portion dedicated to building the UK's digital infrastructure and research and development (R&D).

The UK's growing fibre and 5G network will see an additional 715 million between now and the end of 2021, on top of 25 million investment last year, geared towards rolling out full fibre broadband nationwide.

This includes 200 million to pilot innovative approaches to deploying full fibre in rural locations, starting with primary schools, as well as rolling out a voucher scheme for nearby homes and businesses.

R&D funding, meanwhile, will receive a further 1.6 billion next year in areas such as nuclear fusion, quantum computing, and artificial intelligence, with the government expecting to have spent 9 billion more by 2021 than it had in 2015.

An additional 235 million for the development and commercialisation of UK quantum computing, meanwhile, in addition to 80 million announced earlier this year, would represent a welcome sigh of relief for the industry.

Scientists and experts previously slammed the government for scrimping on quantum computing investment when it had offered just 80 million, instead of the 338 million demanded so the UK "does not lose ground against international competitor programmes".

The Budget also set out a handful of ways the government may use AI to drive growth, including a review into the use of automation and data in the public sector conducted by the Government Digital Service (GDS) and the Office for AI.

The UK's Center for Data Ethics and Innovation has also been commissioned to study the use of data in shaping people's online experiences, and the potential for bias in decisions made via black box algorithms.

But according to research the UK's AI strategy still lags behind European rivals, with findings from analytics firm Exasol showing German businesses are 45% more focused on building AI into their strategies than UK companies.

"While there is room for improvement," said Exasol CTO Mathias Golombek, the announcement of a 1.6 billion investment is "promising" for the UK's industrial strategy.