Everything you need to know about the controversial copyright directive 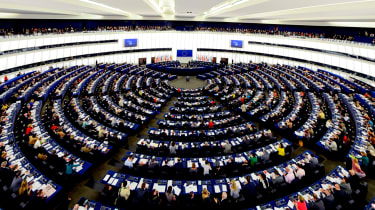 The UK has had laws governing the protection of intellectual property ever since the introduction of the Copyright, Designs and Patents Act in 1988. However, these laws predated the rise of the internet, and as such many have criticised the relevance of an act that was never designed to deal with modern types of creative works.

This is what the Directive of the European Parliament and of the Council on Copyright in the Digital Single Market, also known as the EU copyright directive, aimed to rectify. Copyright laws have become outdated, particularly in the eyes of those in the music and film industries who have supported the introduction of new, more comprehensive laws.

The full details of the Article can be found here, but if you're not into reading legal text, it essentially means that sites that host user-generated content, such as YouTube, Facebook, Twitter and Soundcloud, become legally liable for the copyrighted material it hosts. In YouTube's case, this is the large majority of it.

Article 13 has been labelled the 'meme ban' and it applies to repurposed copyrighted material such as a video from YouTube or music from Paul McCartney which can no longer be used in any works other than the copyright holders'.

This effectively bans the process of creating 'memes', which are entirely driven by the ability to take an image and then edit it to provide some humour. Under the new directive, this is prohibited, as is the remix of any song, unless the remixer had written consent from the original artist to use their work.

In terms of creative content, a shift is well underway towards more original content. Platforms are saturated with creatives trying to gain a following, with the pressure for content creators to be new, original and different having never been greater. New laws could play into the hands of the new breed, but the old dogs of the trade, those who rely on remix culture, could be on their last legs.

Article 13 compels any website to remove infringing content and show they took prior care to prohibit the upload of anything protected by copyright - failure to comply would likely lead to a fine.

The simplest and most likely solution to this issue is to block all EU user-generated content from sites that host it at the point of upload. This is because as soon as copyrighted work has been published to the world, it immediately breaks the law and then the site would become legally liable for the punishment of breaking copyright law.

Article 11 can be considered easier to comprehend than Article 13. Sometimes referred to as the 'link tax', Article 11 is aimed at tech giants which are also news accumulators, e.g. Google and Apple. These are known to offer news services which curated clusters of significant news events of the day, bound into stories by AI-driven algorithms. The legislation simply assists news outlets in generating more royalties for their content.

The rise of social media has changed the way people read the news. Instead of sourcing them from traditional physical outlets which have gained society’s trust over decades, users often get their daily news from Facebook walls, Twitter feeds, or Instagram stories. However, as news stories became more available, humans’ attention span has gotten worse. Users are known to retweet or share news stories which they have not even read (or finished reading), and it is common that they form their opinion based on the headline and brief story descriptions - otherwise known as standfirsts. Then, they quickly move onto the next story. However, that does not mean that companies lose money. With Article 11, they are able to charge a tax on Facebook for these missed clicks.

Article 11 may be considered a knight in shining armour for news sites and journalists. The legislation enforces that they are paid every time they are listed outside of their domain. For example, Google will have to settle up for every IT Pro link listed in its search engine.

What could happen as a result of Article 11?

It's possible that users will see less news on social media as it will cost money for it to appear there. Google, Twitter, Facebook and the rest could even start to form their own newsrooms - from curators to creators.

A pitfall of this would be small, independent newsrooms would have a much more difficult time in growing an audience in a world saturated by major news outlets. Without aggregation, smaller outlets would have to rely on SEO practices which are massively ambiguous, difficult to exploit and, according to recent reports, completely unreliable.

Google recently ran an experiment which essentially simulated the internet under Article 11 to see how it different it was. The results were worrying, especially for sites which rely on advertising revenue as a revenue stream.

Google altered the results to not include pictures and very limited amounts of preview text to avoid paying fines under the law. The experiment showed that even in a moderately strict version of the scenario, there was a 45% reduction in traffic to news sites. Instead, users went to non-news sites and social media to get the news they searched for - a direct contradiction of the aims for the directive.

What is the EU Copyright Directive?

The above articles have been approved by the EU and are being drafted as part of a new directive, rather than a regulation. That distinction is important, as EU member states are not required to follow the exact wording of directives, and are instead able to shape the rules to fit with domestic laws or apply them in a way that makes sense to that country - provided that the spirit of the law is upheld.

However, every member state is required to update existing laws or introduce new ones in order to meet the requirements set out under a directive, usually by a specific date. It’s because of this that the application of a directive can vary between countries.

The UK’s own domestic copyright laws were more than a couple of decades old at the time of the EU’s reforms, and the directive highlights a number of gaps, including around the creation of work by open source developers

The ideas behind the Digital Single Market, which can be traced to 2015 and even before, was outlined with the aim to more smoothly attaining the free movement of people, services and capital. It’s due to the increasing amount that European businesses and people are spending online - projected to rise from just under £500 billion in 2016 to up to £1 trillion by next year.

Negotiations between different European legislative bodies were set to begin in January 2019, but a lack of support forced the closed-door meeting to be cancelled. Since then, fresh talks were held, with the final wording put to a vote at the European Parliament. This vote, which served as the final say, went in favour of Article 13 and Article 11.

MEPs voted in favour of both controversial amendments to the copyright directive on 26 March 2019, which means that member states would have two years to draft domestic laws to ingrain the policies. This, in a way, is similar to how the Data Protection Act 2018 was drafted in the UK to mirror GDPR.

The UK has now officially supported Article 13, meaning tech companies are likely to soon need to manage their own copyright, rather than rely on any third parties or the public to identify potential breaches.

Following a vote by the EU regarding whether to enforce the copyright laws on tech firms, the UK and 18 other countries voted for the controversial Copyright Directive to be approved and have EU nations adopt it within two years.

Once it becomes a law in an EU nation, businesses will need to ensure all content uploaded to their services is completely protected and if not, they must seek out the rightful copyright owner or take the content down immediately.

During the vote, five countries refused to agree to the directive: Italy, Finland, Sweden, Luxembourg and the Netherlands. A further three countries (Belgium, Estonia and Slovenia) abstained from voting to approve the directive in the European Council.

The proposed laws have come under fire for making it an unfair playing field for small businesses that won't be able to set aside the resources to check every single upload. Additionally, tech giants such as YouTube and Wikipedia think it's so unfair, both launched campaigns in protest. YouTube warned its users that there may be unintended consequences, while Wikipedia switched its service off in four territories.

How will it affect you?

Website owners will have to have a think about what kinds of content they're hosting. Of course, as previously mentioned, the passing of the directive doesn't automatically mean it's law. You'll still have time to get things in order before your country adopts its own interpretation of the directive into domestic law - with changes not likely to take place until 2021 - but it's a good time to start taking inventory and decide what content might need to be removed in order to comply with the laws that could come into effect.

Upload filters will have to be applied for every website that fails to meet the narrow exclusions above which are many of the mainstream sites and apps used today. If the notoriously erroneous upload filters were to became mandatory, sites such as YouTube have said that they will cease to allow uploads completely from the EU.

Punishment for breaching the rules as set out in the copyright directive is unknown as of yet. Copyright breaches in the UK typically result in the handing of a three-to-six-month prison sentence and/or a 5,000 fine, so staying original has never been more important.