Google worried about insider threats from temporary workers and contractors 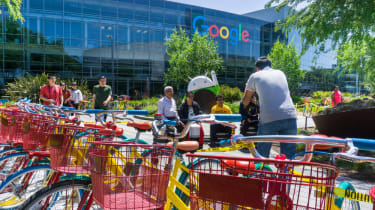 Temporary staff at Google are seen as "significant risks" according to a leaked internal training document, seen by the Guardian.

Full-time Google employees are being instructed on the ins and outs of interacting with the many temps, vendors and contractors, known as TVCs at Google. The instructions involve not inviting them to important meetings, stopping them from partaking in professional development training and denying them benefits such as free T-shirts.

The document, called the ABCs of TVCs, says the tech giant is concerned about standard insider threats, such as leaks of proprietary information, but it's also worried about the risk of being found to be a joint employer. This is a legal designation which could be costly for Google in terms of benefits.

"Working with TVCs and Googlers is different," the training documentation explains. "Our policies exist because TVC working arrangements can carry significant risks."

According to the Guardian, which claims to have spoken to a Google employee with access to figures, out of approximately 170,000 people around the world who now work at Google, only 51% are full-time employees and the other 49%, are TVCs.

This two-tier system has complicated labour activism at Google. After 20,000 workers joined a global walkout on 1 November in protest of the company's handling of sexual misconduct cases, Google gave in to some of the demands and said it would overhaul its sexual harassment policies, but this didn't include temporary workers.

Last week, the organisers of the walkout published an anonymous open letter addressed to Google's CEO Sundar Pichai entitled from "TVCs at Google". The letter laid bare some of the concerns that TVCs have due to Google's differential treatment, including lower wages and "minimal benefits".

"Google routinely denies TVCs access to information that is relevant to our jobs and our lives," the letter said. "When the tragic shooting occurred at YouTube in April of this year, the company sent real-time security updates to full-time employees only, leaving TVCs defenceless in the line of fire. TVCs were then excluded from a town hall discussion the following day."

Google has disputed this account of the shooting, saying that it worked to provide TVCs with security updates during the incident, but that some information was sent through a different email account or came from TVCs' direct employers and that all TVCs were invited to an all-hands meeting at YouTube after the incident.

"We hire Google employees to work on jobs that are core to our business, and look to temps, vendors and contractors when we either don't have the expertise or infrastructure ourselves or when we need temporary help due to employee leaves or short-term projects," a Google spokesperson said in a statement.

"Temps, vendors and contractors are an important part of our extended workforce, but they are employed by other companies, not Google."