Report claims green tech will be at the heart of a manufacturing revival, but Brexit threatens derailment 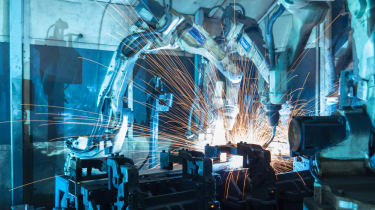 The government has been challenged to allay the pessimism around automation by taking advantage of new technologies to create one million high-tech manufacturing jobs by 2030.

The Trade Union Congress (TUC), Britain's coalition of trade union organisations, has proposed five key policy planks to achieving a target that it's demanded the government work towards, together with business and trade unions.

Proposals outlined in a new report titled 'All Tomorrow's Jobs' include offering new skills to workers in industries which face technological disruption, and fighting for trade union representation on key industrial decisions.

Remaining part of the Europian Union's (EU) single market and customs union beyond the date of EU withdrawal will also have a significant effect on the health of the UK's industrial landscape, the report claims.

"Too many parts of Britain have been held back by a lack of decent jobs. They deserve better," said the TUC's general secretary Frances O'Grady.

"That means businesses, government and trade unions working together, locally and nationally, to bring high-tech industries to more places across the UK."

"We need a local industrial strategy for every town that has been held back. We need to train workers in the skills needed for tomorrow's high-tech industries. And we need a Brexit deal that protects jobs - we are open to alternatives, but the best option currently looks like being in the single market and customs union."

Digitisation is the biggest challenge facing UK manufacturing, the report says, but, instead of being seen with pessimism, it should be considered an opportunity to create new jobs, mainly in an under-explored 'clean energy' sector.

The TUC claims that many jobs will be created if the government sets a 50% national target for renewable energy sources by 2030, with companies in this space primed to take advantage of advancing technology like robotics.

The organisation has also called for the creation of 'clean technology communities' in former manufacturing heartlands "that have seen a demise of heavy industry", such as parts of the North of England. Beyond reinvigorating these communities, such areas already have an industrial heritage that could bring a massive benefit to new sectors.

Meanwhile, there are several key areas TUC has identified as having a potential effect on the workforce and the nature of work. These areas including 'automation', which will replace human input, 'digitisation of processes', which will mark a transition from physical to virtual, and 'coordination by platforms', which will change work organisation.

In addition, specific game-changing technologies, such as electric vehicles and industrial biotechnology, can collectively affect employment, working conditions, and work culture and may lead to a complete reorganisation of the nature of employment.

One effect identified could be a reduction in the size of certain teams, given the scale of tasks that might be automated, but a demand for higher skills within those teams.

"The UK now has an industrial strategy that could help but that is still, some one year on from the white paper, more theory than practice," said Maddie Scott, senior policy researcher at employment organisation EEF.

"What is the right approach to take things forward and ensure a competitive manufacturing sector that continues to invest and evolve in the UK?

"An industrial strategy is not just a document for one department, it is a way of changing the relationship between government, businesses and their employees to deliver outcomes more effectively, but these outcomes must be known and reinforced across government.

She added that clarity is needed on the goals of the strategy, including how it will be measured and how other sectors are allowed to contribute.

The report also sounded a warning over the government's handling of Brexit, claiming it's essential for the UK to remain in the single market and customs union to have any chance of reaching the 'one million jobs' target.

The organisation said it would not be possible to achieve the target if "we put obstacles in the way of ourselves" and called for a barrier-free, tariff-free and frictionless trading relationship with the EU beyond March 2019.