After EU negotiations were vetoed, France will implement new tax on GAFA 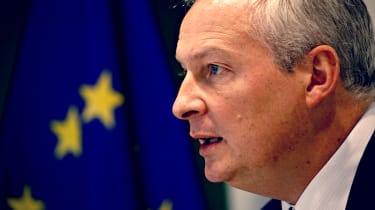 After a failed attempt to secure an agreement on an EU-wide levy, France will move ahead unilaterally on its taxation of worldwide tech giants.

The tax on GAFA - Google, Apple, Facebook and Amazon - companies is expected to bring in hundreds of millions of Euros in revenue.

"The tax will be introduced whatever happens on 1st January and it will be for the whole of 2019 for an amount that we estimate at 500m," Bruno Le Maire, the French finance minister said a press conference in Paris.

The Organisation for Economic Co-operation and Development (OECD) has been working on proposals for an international agreement to regulate taxation on technology companies.

France has chosen to move forward with plans because of the way big companies are structured so carefully and intricately in ways that allow them to derive huge revenues form European economies while skirting the bulk of their tax bills by moving profits to low-tax jurisdictions.

The European Commission estimates that regular companies pay in the region of 23% tax on profits while internet companies only pay a mere eight to nine percent and some firms pay nothing at all.

The EU-wide levy failed in part because key member states vetoed the proposal, namely Ireland, a country in which Google and Apple both own headquarters. According to DW, Ireland justified its decision because it believed the tax would exacerbate EU-US trade tensions.

France has been recently backed by Germany in a proposal to enforce a three percent tax on big internet companies that make money from user data or digital advertising.

It's proposed the three percent tax should be enforceable by 2021 with the hope that it will level the playing field between the big guys and the smaller companies that pay more tax. But again, it must be agreed upon by all 28 member states and stets such as Ireland, Sweden and Denmark have all publicly voiced their concerns while Germany is seeking a diluted proposal, much to the frustration of France.

The UK also has plans to pursue a domestic tax after Phillip Hammond said the UK can no longer wait for "painfully slow" discussions regarding tech firms' tax avoidance in the EU to produce meaningful solutions.

Hammond plans to introduce the new domestic tax by April 2020 which is predicted to rake in more than 400 million for the British economy.