The exemption is "against the very purpose of the Data Protection Act", say campaigners 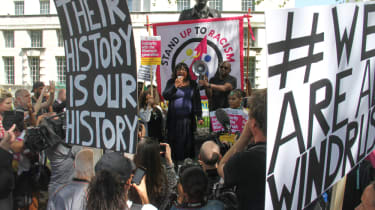 Two campaign groups have been granted permission to bring a judicial review against an immigration exemption written into the Data Protection Act 2018.

The exemption permits the Home Office data controllers to restrict access to personal data if it would be likely to prejudice "effective immigration control". This, the campaign groups say, affects the three million EU citizens who will have to submit their applications for new immigration status after Brexit.

It potentially affects anyone who has dealings with the Home Office, some other state bodies and several companies that deal with immigration control, such as those seeking refuge in the UK and those impacted by the Windrush scandal.

"The attempt to remove so many people's data rights is particularly worrying in the context of the Home Office's hostile environment policy," said Leigh Day solicitor Rosa Curling. "Our clients are pleased to be have been granted permission so they can present their arguments in full to the court at a substantive hearing."

The 3million and Open Rights Group argue that the exemption is unlawful because the exemption removes people's right to access their personal data, which is of particular concern after the chief inspector of borders and immigration acknowledged the Home Office had a 10% error rate with its immigration status checks.

The campaigners say that denying people the right to access their data will prevent those applying for settled status to properly challenge errors made by the Home Office. This could lead to applications relating to immigration statuses being wrongly refused or wrongful deportations taking place.

IT Pro has approached the Home Office for comment.

"If over three million EU citizens are going to apply for settled status, they must be able to do so knowing it's safe for them to do it, with the right to see what the Home Office is doing with their data," said Nicolas Hatton of the3million.

"Not only does this exemption go against the very purpose of the data protection act (which means to protect us from data abuse from those holding our data), but it also reinforces the suspicion that the Home Office has something to hide. I am confident our case against the Government will be successful, for the sake of EU citizens in the UK who deserve to be treated fairly, as well as all third-country nationals who fall under the same exemption."