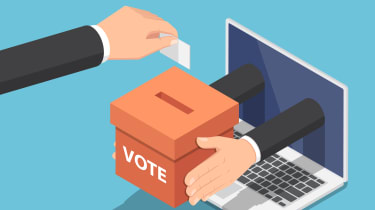 A coalition of politicians, campaigners and public interest groups have warned that elections in the UK are at risk of interference because campaign laws have not kept up with the emerging digital infrastructure.

The growing use of social media platforms and services managed by big tech companies also poses a risk to democracy given these spaces are widely unregulated, according to a report published by the Electoral Reform Society (ERS).

The 60-page report, titled 'Reining in the Political Wild West: Campaigning Rules for the 21st Century', was published yesterday to coincide with the Facebook's 15th anniversary.

In it, a range of voices have argued the firm and its rivals like Google and Twitter must be more transparent on how campaign groups use their platforms, and how personal data is used to spread information.

"With talk of a fresh general election or referendum heating up, the need to bring Britain's outdated election laws into the 21st century is urgent," said the ERS' director of research and policy Dr Jess Garland.

"Make no mistake: our democracy is under threat from dark ads, dodgy donations and disinformation, but with the right rules online campaigning can be a real force for good. The government should listen to these vital proposals and take action before it's too late."

She warned that Facebook, among other social media giants, has changed how campaigning works, yet online political campaigning "remains an unregulated Wild West".

The next election, moreover, sees a real risk of "foreign interference and dodgy dealings" without urgent action.

The 'one missing piece' in legislation

Political parties spent around 1.3 million on Facebook during the 2015 general election, a figure that almost doubled during the 2017 campaign to 3.2 million, with data-driven campaigning spawning an entire industry.

The Information Commissioner's Office (ICO) suggests the one missing piece in legislation, now that the EU's General Data Protection Regulation (GDPR) has come into force, is a statutory code of practice.

"We're waiting for a response from government to that recommendation, but we feel as though this should be a statutory code in the same way as we have a code of practice on data protection in the media," said the ICO's deputy commissioner for policy Steve Wood.

"We also feel that this will set out a level playing field for all of the different actors who are using data for political purposes, about what they can do with data.

The report also set out a series of recommendations for policymakers and social media companies which should, in theory, reduce the risk of any interference in political campaigning as well as the prevalence of disinformation.

One effective short-term measure, according to the report, would involve extending the requirement for online advertising to be 'imprinted'; where all materials must show who produced and funded them.

Creating a universal and publicly-available online database of political adverts, which would also be searchable, could also raise transparency and allow voters to identify the origins of a post or message.

Advertising to an audience of one

Among meatier recommendations include additional enforcement powers for organisations like the Electoral Commission, to match the ICO's considerably-increased powers since GDPR came into force.

The ERS also echoed the ICO in suggesting political parties must work with the government to establish a legally-binding code of practice, while policymakers must urgently reform electoral law to future-proof political regulations for a digital landscape.

Emerging threats to democracy may include incorporating technologies like deep learning into micro-targeting, according to Demos' senior researcher with the centre for analysis of social media (CASM) Josh Smith.

"As voter profiles become increasingly detailed, use of this technology by campaigns could lead to their targeting people based on characteristics, such as health, race or sexual preference, which campaign organisers may not be aware they are using," he said.

"This could be true even where protected characteristics are not stored, as machine learning makes it possible to infer detailed demographic information based on seemingly innocuous data."

"Political groups may soon be able to incorporate data gleaned from 'wearables' the Internet of Things (IoT) into their messaging, or to algorithmically generate entirely new slogans and designs."

"The direction of travel is towards campaigns being able to address each voter individually, based on their specific profile; advertising to an audience of one. This individual targeting risks breaking down public political discourse - having a conversation about what a party stands for in the run-up to a campaign is difficult if your neighbours and family have seencompletely different messages."

The report has been published in light of three major public investigations into the relationship between tech giants and political campaign groups, with activity during the 2016 EU Referendum, particularly under the spotlight.

Both the Electoral Commission and ICO have reprimanded the pro-Brexit group Leave.EU for overspending, and the misuse of data respectively, in tandem with probing social media companies like Facebook and Google.

Meanwhile, Parliament's Digital, Culture, Media and Sport (DMCS) select committee has led an ongoing investigation into the phenomenon of disinformation and fake news, which itself has recommended that government introduce tighter regulations for tech companies.