EU nations will face sanctions if they deal with Huawei, warns US

While addressing the EU, the US envoy says that dealing with Chinese equipment vendors will lead to weakened trade with the States 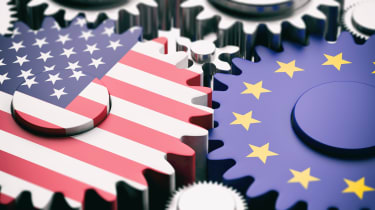 In the latest blow to Huawei, any EU country that uses Huawei or any Chinese technology when building critical infrastructure will face US sanctions, according to the US envoy.

Speaking in Brussels, Ambassador Gordon Sondland, Trump's envoy, said that the Trump administration is trying to enforce a blanket ban on Chinese companies deploying 5G technology in all nations which are allied with the US.

"There are no compelling reasons that I can see to do business with the Chinese, so long as they have the structure in place to reach in and manipulate or spy on their customers," said Ambassador Sondland. "Those who are charging ahead blindly and embracing the Chinese technology without regard to these concerns may find themselves in a disadvantage in dealing with us."

He added that European countries should use Finnish or other Scandinavian companies to deliver 5G tech, despite being more expensive. Nokia and Ericcson are two of the leading companies from the region in this sector.

Sondland cited a Chinese law which allegedly compels private companies to share any and all information they have with the Chinese government "on any intelligence matters in secret and without refusal" to justify the announcement.

Failure to abide by the demands of the US will lead to consequences whereby the US will have to be "more careful in sharing information, in transacting business", and a "host of things" Sondland said.

Huawei did not reply to IT Pro's request for comment at the time of writing.

Senior European officials seem to be in agreement with Sondland and the US. The law to which Sondland was referring was addressed by Andrus Ansip, European Commission vice president for digital affairs.

He said the law which passed in 2017 has made dealing with Chinese companies in Europe much riskier due to the mandated intelligence disclosure law.

The announcement preceded the meeting held on Friday where representatives from all 28 member states met in Brussels to discuss imposing expanded sanctions on companies, countries and people involved in cyber crime.

The meeting seems to signal increased concern over Chinese and Russian targeting of western networks.

Cyber crime, which can include data breaches and theft, intellectual property theft and attacks on IT infrastructure, could be punished by asset freezes and travel bans for companies, according to an internal memo.