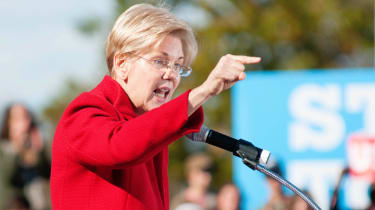 On Monday, the US senator and Democratic candidate for president Elizabeth Warren called for big tech companies to be broken up with Facebook perfectly illustrating her point later that day.

The social network briefly blocked her campaign from running advertisements on the same evening, which just happened to call for the break up of Facebook. The company did unblock the posts, but not before Warren took to Twitter to point out the validation.

Curious why I think FB has too much power? Let's start with their ability to shut down a debate over whether FB has too much power. Thanks for restoring my posts. But I want a social media marketplace that isn't dominated by a single censor. #BreakUpBigTech https://t.co/UPS6dozOxn

"Curious why I think FB has too much power? Let's start with their ability to shut down a debate over whether FB has too much power. Thanks for restoring my posts. But I want a social media marketplace that isn't dominated by a single censor. #BreakUpBigTech," she wrote.

On Monday Warren laid out plans to quell the reliance on a select few tech companies and increase competition in the digital space. She took aim at Google, Amazon and Apple, as well as Facebook.

It's not the first time this type of call has been thrown at the social network - which also owns Instagram and WhatsApp - as the FTC are said to be also considering breaking up the monopoly.

"Today's big tech companies have too much power - too much power over our economy, our society, and our democracy. They've bulldozed competition, used our private information for profit, and tilted the playing field against everyone else. And in the process, they have hurt small businesses and stifled innovation," said Warren.

Her proposals have a whiff of those brought against Microsoft in the late nineties regarding its antitrust suit with USA's Department of Justice (DOJ). In an attempt to combat Microsoft's monopoly of the personal computer market, lawmakers tried to prevent the company from bundling Internet Explorer in with its Windows PCs.

"Today's big tech companies have too much power -- too much power over our economy, our society, and our democracy. They've bulldozed competition, used our private information for profit, and tilted the playing field against everyone else. And in the process, they have hurt small businesses and stifled innovation."

The same sort of logic applies here with her plan to dismantle tech companies from their subsidiary arms. Facebook would have to be a completely separate entity from Instagram and WhatsApp. Amazon could remain as an e-commerce platform but cut ties with Amazon Basics and Amazon Marketplace.

This is so manufacturers won't be overshadowed by Amazon's own renditions of a product that's naturally promoted to the top of its own platform which happens to also be a globally popular go-to for practically any shopping requirement.

Warren plans to achieve this by targeting any platform with an online marketplace or exchange with a global revenue of 25bn or more and then redesigning them as 'platform utilities'.

This would entail new laws having to be created, prohibiting these companies from owning both the platform utility and any participants of that platform, while having to "meet a standard of fair, reasonable, and nondiscriminatory dealing with users".

"For smaller companies (those with annual global revenue of between $90 million and $25 billion), their platform utilities would be required to meet the same standard of fair, reasonable, and nondiscriminatory dealing with users, but would not be required to structurally separate from any participant on the platform," she said.

She also wants to put a stop to big companies simply swallowing their competition in the form of massive mergers. To do this, she proposes the advent of a regulatory body to oversee the nature of these allegedly illegal and anti-competitive mergers.

"Unwinding these mergers will promote healthy competition in the market - which will put pressure on big tech companies to be more responsive to user concerns, including about privacy," she said.

Although she would have just won the hearts of SMBs, startups and privacy advocates across the States with these proposals, she cautions that the internet isn't likely to change too drastically.

What will change is the landscape of the products made available. Those 30 coffee machines will be comprised of other brands not yet heard of as they would have been allowed to flourish in an open, competitive market.

She also thinks privacy will be impacted in a positive way. Citing Facebook's interoperability with Instagram and WhatsApp, she said that the disconnection of the services will encourage Facebook to dedicate more effort to improve the user experience and privacy of the services.

"We must give people more control over how their personal information is collected, shared, and sold - and do it in a way that doesn't lock in massive competitive advantages for the companies that already have a ton of our data," Warren said.

"We must help America's content creators -- from local newspapers and national magazines to comedians and musicians - keep more of the value their content generates, rather than seeing it scooped up by companies like Google and Facebook.

In a follow-up interview with The Verge, Warren added another name to her hit list. She said Apple can't both host an app store and then sell apps on it too.

"Apple, you've got to break it apart from their App Store. It's got to be one or the other," Warren said. "Either they run the platform or they play in the store. They don't get to do both at the same time."

Much in the same way she singles out Amazon and its Basics range for a market monopoly on the platform, under her proposed laws, Apple wouldn't be able to push apps like iMovie, Pages and Apple News. This would allow competitors such as Adobe Clip, Microsoft Word and the BBC to gain more widespread exposure on a platform dominated by its creator.